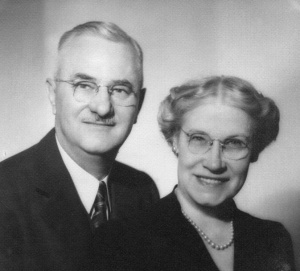 After attending the Zentralschule at Ohrloff 1899-1900 and at Halbstadt 1900-2 and the normal school at Halbstadt until 1904, he taught in the Alexanderwohl school until 1912. In 1912-15 he attended the Baptist Theological Seminary at Hamburg, Germany, then taught at the Realschule at Wilhelmsdorf, Württemberg, Germany, 1916-20. He served as secretary of the Deutsche Mennonitenhilfe in Germany 1920-23. In Russia Warkentin was a member of the Lichtfelde Evangelical Mennonite Church. In 1920 Abraham Warkentin was ordained minister and elder by the Conference of South German Mennonites. In 1923 the family immigrated to the United States. After a brief stay in Hillsboro, Kansas, they moved to Newton, Kansas, where he became assistant pastor of the First Mennonite Church and instructor in languages and Bible at Bethel College. During 1927-29 he earned his A.B. and A.M. degrees at the University of Kansas, then returned to teach at Bethel College. In 1933 he entered the University of Chicago where he received the Ph.D. degree in 1935. His dissertation, Die Gestalt des Teufels in der deutschen Volkssage, was published in 1937.

Among Warkentin's significant achievements was the revitalizing of the Mennonite Historical collection at Bethel College. He laid the foundation for the present Bethel College Historical Library (see Mennonite Library and Archives of Bethel College). In 1943 he suffered a stroke and was forced to resign from his duties in connection with Bethel College and the First Mennonite Church. After his health was sufficiently restored he accepted the assignment of establishing the Mennonite Biblical Seminary in Chicago which started functioning in 1945 and of which he was the first president.

Warkentin's contribution in education, in strengthening basic Mennonite and Christian convictions within the church, in the production of Christian literature, relief work, and the training of the ministry was of great significance. He also wrote Who's Who Among the Mennonites (N. Newton, 1937, 1943) (with Melvin Gingerich); Der Eid (G.C.M. Committee on Doctrine and Conduct, n.d.); Extracts from Mennonite History in Outline Form (n.p., n.d.); A Harmony of the Kings (North Newton, 1939 and 1942); The Oath (G.C.M. Committee on Doctrine and Conduct, 1937). He was also a regular contributor to various periodicals and an appreciated Bible and conference lecturer.