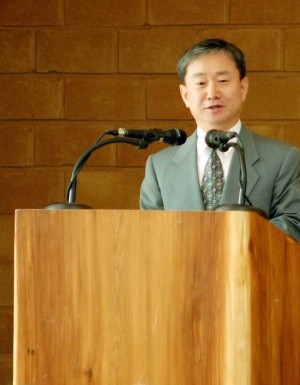 Hun Lee, who had been a Presbyterian pastor in Korea before studying at CMBC, was ordained as a Mennonite minister in December 2000 at the Charleswood Mennonite Church. He helped to form the London group in 2000, and moved to London in 2004 and provided pastoral leadership until December 2007. Despite Hun Lee's vision for one congregation with two languages, during his pastorate the Korean-speaking part of the Valleyview congregation became an independent "emerging" congregation still sharing the Valleyview building. In April 2007 Vision Mennonite was formally accepted as a congregation in Mennonite Church Eastern Canada. Hun Lee resigned as pastor in order to devote more time to mentoring other Korean Mennonite pastors. Hun and his wife, Sunny Lee, returned to South Korea as Mennonite Church Canada Mission Associates at the end of 2009.

Bock Ki Kim became pastor at Vision in 2008. For a short time the group continued to grow, but as families moved away from the London area the congregation dwindled. The congregation held its final service on 2 October 2011.