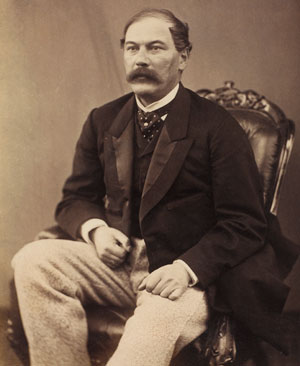 Eduard was born to parents of German descent in what is now Jelgava, Latvia. His parents groomed him for a career in commerce, but instead he studied to become a military engineer. He joined the Imperial Russian Army in 1836 and was eventually appointed adjutant (aide) to Tsar Alexander II of Russia, who was ruler from 1855 to 1881. Eduard von Totleben became Governor General of Vilna in 1880 and was also given the title of hereditary count.

General von Totleben’s connection with the Mennonites came in the 1870s when the Russian government passed a law of universal military conscription, planning to end all special privileges for German colonists by 1880. This law threatened the Mennonites’ theology of nonresistance as well as their control over schooling, prompting members of the Bergthal Mennonite Settlement and others to consider emigration. The Tsar sent Totleben to try to persuade the Mennonites to stay, offering them the option of the forestry service (Forsteidienst) for their young men as an alternative to military involvement.

On 11 April 1874, General von Totleben arrived in the Molotschna Mennonite Settlement, where many people accepted the offer of forestry service as an alternative to military involvement. He also met with a delegation from the Bergthal Mennonite Settlement in Halbstadt on 20 April 1874, giving them the same offer. In addition, he held a special meeting for those people who had already sold their land, offering to help them get their property back if they decided to stay.

In his negotiations with the Bergthal Mennonites, General von Totleben tried to persuade them to send a delegation to the governor to discuss the matter. When he was unsuccessful in persuading the group to stay in Russia, General von Totleben instead helped them obtain permission from the Tsar to leave and gave them passports for their trip. Later, in a report to the Minister of the Interior, the general said that he had given permission to the minority in order to avoid making the majority suspicious.

General Eduard von Totleben’s contact with the Mennonites of Russia was limited, but his work helped to establish a pattern of emigration which would later bring many more Mennonites to North America and other areas of the world.