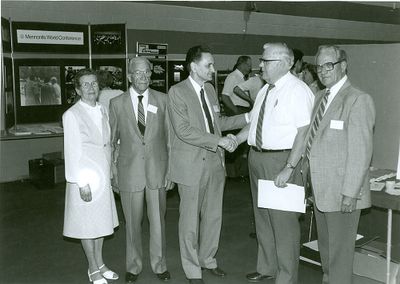 Left to right: Anna and Isaac Tiessen, John Redekop shaking hands with Jake Fransen, Henry Bruck. Taken at the Conference of Mennonites in Canada annual sessions when the Canadian Conference of Mennonite Brethren Church offered an apolgy for past hurts for which they were responsible.
Photo: Centre for MB Studies (Winnipeg), NP 149-02-0372.

Isaac spent his early years on his parents’ farm in Krutoyarovka (also known as Schönfeld), South Russia. When three of his brothers were murdered by bandits on 10 January 1919, the family fled to Friedensruh in the Molotschna Mennonite Settlement. Isaac completed his basic education in Alexanderkrone, but although he had hoped to become a doctor, he was unable to complete his medical studies. During a revival in March 1923, Isaac was converted to Christianity. He preached his first sermon at one of the revival meetings, and he was baptized in 1925.

Seeing no future in Russia, Tiessen decided to immigrate to Canada in 1925, even though his parents and siblings were unable to leave. Isaac left for Canada alone and settled first in Kingsville, Ontario, where he worked on farms and in orchards. He was joined four and a half years later by his fiancée, Anna Huebert, and her family, who settled in Leamington. On 2 November 1930, Isaac and Anna were married at the City Hall in Leamington. They had three sons and one daughter, all of whom survived childhood. Isaak worked for 23 years at the H. J. Heinz Company while also serving in the church.

After Isaac retired in 1971, he and his wife moved to Strathroy, Ontario. He served as the pastor of the Komoka Mennonite Brethren Church for a year, as well as working as a chaplain in various nursing homes near London, Ontario. He also helped publish the large-print Sing Your Way Home songbook and wrote Why I Do Not Take the Sword about his experiences as a pacifist in Russia. On 5 July 1986, Isaac was part of the delegation of Mennonite Brethren church leaders offering an apology to the Conference of Mennonites in Canada for the common practice of refusing membership to people from other Mennonite groups unless they were re-baptized by immersion, a custom which he had become convinced was wrong.

As Isaac and Anna Tiessen grew older, they became ill and had to move into Tabor Manor in St. Catharines, Anna in 1997 and Isaac in 1998. Isaac’s health worsened and he died there on 28 November 1999. The funeral was on 4 December 1999 at the Leamington Mennonite Brethren Church.

Isaac Henry Tiessen was a dedicated minister and teacher, able to acknowledge his mistakes and to seek reconciliation with others. Through his work in the Ontario Conference and the various churches where he served, he helped strengthen congregations and communities, providing an example for future generations to follow.