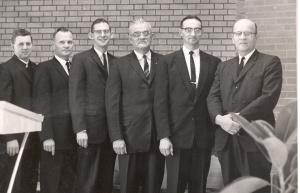 Some of the first workers in Toronto and representatives from the Ontario MB Conference at the dedication in March 1963: Emerson McDowell, Danforth Mennonite, William Schmidt, Herb Swartz, John Baerg, Peter Penner, and Henry H. Voth. Schmidt and Baerg represented the Conference.

What became known about 1978 as Yorkdale Community Church in Toronto, Ontario actually began services in 1957, and formally organized a year later as Willowdale Christian Fellowship. H. H. Voth was the founding leader of a small group concerned in the first instance to provide a church home for those who had moved to Toronto and to attract students in the city from Mennonite Brethren homes.

This extension work of the Ontario Conference of Mennonite Brethren Churches to Toronto, first located in Willowdale, a middle-class Anglo community, moved to the Baycrest Avenue Public School in 1959 and then to Flemington Road School because of a decision by the Home Mission Committee to do work in Lawrence Heights where a large low-rental housing project for 4,000 residents should provide "the challenging outreach" that the group was said to need. This relocation meant selling the house in Willowdale and securing a lot for the construction of a church at 272 Ranee Avenue, between Dufferin and Bathurst, south of Highway 401. Ranee Ave. was immediately south of the giant shopping mall named Yorkdale whose construction began in 1962.

The first couple to occupy the older type house at this location in 1959 were Herbert and Margaret Swartz. They saw the organization of the Toronto Mennonite Brethren Mission Church in May 1961 with 16 charter members. They were succeeded in 1962 by Peter and Justina Penner. The latter had barely moved in when the construction began immediately behind the house. An attractive edifice was completed and dedicated 31 March 1963.

Rudy Dueckman, who had moved to Brampton, became moderator in 1964 when the Penners moved to Hamilton for further studies. The pastor most successful in the ministry to Lawrence Heights (with assistance from Mennonite Central Committee Ontario) was Isaac Tiessen. A longtime leader in the Ontario Mennonite Brethren conference, Tiessen served from 1965 to 1971, while also giving leadership with his wife Anna to the Toronto Mennonite Brethren Church. They were succeeded by Allen and Anne Guenther (1971-1974), and in 1974 by Ron and June Friesen, who remained until 1979.

About this time the Ontario Conference supported the formation of a new congregation in Brampton, and the Toronto church was renamed Yorkdale Community Church. Though other families left to join established churches closer to their homes, Peter and Tina Brown, Christian Service workers, carried on and were succeeded by Allan and Janice Epp in 1980.

The Conference sold the church building in May 1988 to a Jewish group. This made it possible for the continuing Yorkdale group to rent the facilities for its Sunday services and mid-week programs. In 1993 John Classy as pastor moved the congregation to a storefront at 702 Wilson Ave.

In April 1996 Yorkdale merged with the New Covenant Christian Fellowship under the latter's name. The merged group met at the Society of International Ministries Chapel in Scarborough.