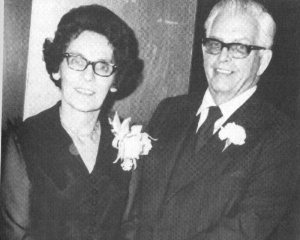 In 1912 the Thiessen family moved to the village of Rosenfeld where Abram attended school. By the age of 12 he was in grade nine when he took a break from school for six years. For the next few years he found odd jobs with the local railroads, grain elevators and farms. In 1928 he returned to formal studies in Rosenfeld. In 1929 he borrowed money from his grandfather to attend school in Steinbach where he earned the Governor General's Bronze medal in 1930.

Abram was baptized by Bishop David Schulz of the Bergthaler Mennonite Church of Manitoba on 21 May 1928. For the next five years his dream was to become a missionary in India. However, due to extra responsibilities at home, lack of the desired education, and a lack of funds, this dream was never realized.

Even though Thiessen started his career in business in 1931, he became best known for the formation of Thiessen Bus Lines in 1946. It  grew to become Grey Goose Bus Lines in 1961 and served western Manitoba and north-western Ontario. Thiessen was the first to offer full service bus tours in 1947. These bus tours developed into a separate business, known as Circle Tours, in 1966. Together with partner George Fast, Thiessen also operated a Chrysler car dealership (1936-1957), a farm implement dealer with Massy-Harris (beginning in 1948), a trucking business, and a used clothing and grocery store based in Rosenfeld.

By 1950 Thiessen had five buses operating. The business kept expanding with the purchase of taxi companies, a bus manufacturer, and sanitation companies. In 1970 Grey Goose went public. In 1977 Thiessen gave up the day to day management of Grey Goose but remained chairman of Grey Goose Corporation.

As a member of the Conference of Mennonites in Manitoba Radio Committee, Thiessen conceived the idea of a Mennonite community radio station in 1955. With Thiessen as chair, a wide range of Mennonite leaders were brought together to form a station that would provide good programs and could be a witness to others in the listening area. On 13 March 1957 Radio CFAM in Altona was born. Thiessen resigned and sold his shares in the station in November 1957.

Thiessen also maintained a 640-acre farm in the Gnadenfeld school district. In 1965 the farm was sold and the family moved to Winnipeg. The amount of volunteer time Thiessen poured into the various committees and boards was possible only through the support of his wife and children.