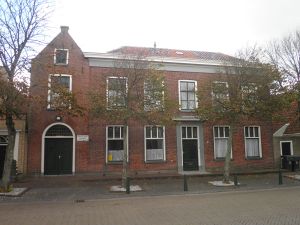 Terschelling, a Dutch island (1947 pop. 3,544; 2005 pop. 4,737) formerly belonging to the province of North Holland, now to Friesland, with 264 Mennonites. Mennonites have been here since the 16th century. On his visits here Leenaert Bouwens baptized 12 persons in 1563-65, and at least 166 in 1568-82. Shortly after there were two or three congregations of different branches. There may have been a Flemish church, concerning which there is, however, no information. From about 1600 there was a congregation of followers of Elder Jan Jacobsz, who made several visits to the island for baptism and communion services. This congregation, whose members were mostly engaged in farming, had its main center in the village of Midsland, while a simple meetinghouse was also found in the village of West-Terschelling. The Janjacobsgezinden often had difficulties with the governors of the island, who refused to acknowledge the marriages performed in their meetinghouses. In 1622 and again in 1679 the governors ordered their marriages to be performed by the magistrates. Finally in 1686 the governor consented to the old practice of having marriages performed in the meetinghouses by the elders. During the 18th century, when the Janjacobsgezinden were less conservative than those in Friesland, the ties with the other Janjacobsgezinden gradually were loosened; the congregation was usually called Old Flemish and later even Zonist. Until 1782 this congregation was exclusively led by ministers chosen from the local membership, but in 1782 a preacher was called from outside, viz., A. S. Cuperus, who served here 1782-90 and prepared the merger with the Terschelling Lamist church, which came into being in 1790; at this time the baptized membership of the Janjacobsgezinden numbered 73.

The Lamist church was in the 17th century called the Waterlander congregation. In the 18th century it was called United Waterlander and Flemish church, or simply Flemish church, and also Lamist congregation. It was always smaller and less conservative than the Janjacobsgezinden. Its members for a large part were engaged in shipping. In 1713, 70 members of this congregation, which must have been nearly the entire male membership, were commanders of Greenland whalers and other vessels. It had its largest meetinghouse in the village of West-Terschelling and a small one at Midsland. Until the merger it was served by lay preachers, sometimes called from their own members, later mostly from outside. For the salaries of these preachers the congregation was regularly subsidized by those of Amsterdam, Haarlem, and Rotterdam. At the time of the merger with the Janjacobsgezinden (1790) the membership was only 50.

In 1666 a severe blow struck the island; during a raid by the British, then at war with the Dutch, 350 houses of West-Terschelling were reduced to ashes, 180 of which belonged to Mennonites, and two of the Mennonite meetinghouses burned down. A contribution of 11,175 Dutch guilders was raised in several Dutch Mennonite congregations to rebuild these homes and churches. In 1734-1736 the two congregations of Terschelling contributed to the relief of the Mennonites in Prussia.

In 1790, when the two congregations merged, neither of the meetinghouses at Midsland was being used; the united congregation used the two meetinghouses of West-Terschelling until 1817, when the former Janjacobsgezinden meetinghouse was sold, only the old Waterlander meetinghouse near the harbor being used henceforth. This church was remodeled in 1850 and installed an organ in 1851. As a gift of the A. C. H. Eschauzier family of The Hague in 1910 it acquired a new organ and stained glass windows, two of them with Biblical figures.

Church activities include a Sunday school for children and a ladies' circle. Terschelling was one of the first Mennonite congregations in the Netherlands to have a choir (1895). Mennonite families at Terschelling, some of which are still found among the membership, are Swart, Doeksen, Roos, Rotgans, Duyf, Oepkes, Spits, Reedeker, Smit, Schol, Vis, Eschauzier, and Bakker.