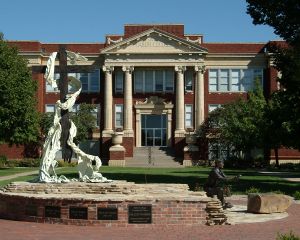 Meanwhile another School Association, supported by several Mennonite groups, organized a school near Buhler, Kansas, in Reno County. J. F. Duerksen was appointed to direct the school. In 1899 Duerksen was transferred to the head of the German Department of McPherson College in McPherson, Kansas, after an agreement was reached that the Mennonite Brethren Conference would sponsor the German Department. By this arrangement Duerksen was able to serve as spiritual counselor for Mennonite students. The future educational leadership of the Mennonite Brethren and Krimmer Mennonite Brethren (KMB) conferences received its stimulation under this provisional agreement with McPherson College. This arrangement worked satisfactorily for five years, but soon students began to dream of a conference school. H. W. Lohrenz and P. C. Hiebert, both students of McPherson, became interested in a conference school; and J. K. Hiebert, minister of the Ebenfeld MB Church, helped Lohrenz promote the plan and bring the issue before the conference. In 1907 a recommendation for an MB college was approved in a special meeting of MB and KMB conference representatives. A School Association was formed to carry out the program. Articles of Incorporation were prepared, and a charter was granted by the State of Kansas on 19 March 1908. Hillsboro was chosen as the site when it offered $6,533 in cash, building lots, material, and labor. The management of the corporation was vested in a board of directors composed of nine voting members. J. K. Hiebert was the first board chairman. The school was named Tabor College, and the Society was called the Tabor College Corporation. In the spring of 1908 the building was begun. It was completed at a cost of $13,500. Although the building was not yet completed, classes started on 14 September 1908, in the Church with three teachers — President H. W. Lohrenz, P. C. Hiebert, and P. P. Rempel — and 39 students. Before the year was over the enrollment reached 102, and three more faculty members were added: Z. C. Bartel, Katharina Friesen, and Tina Schultz. By 1910 instruction was offered in seven departments with seven teachers. The academy and the preparatory school dominated the early years of the program.

Following the dedication of the new building 12 September 1920, the school enjoyed several years of prosperity and progress. In 1924 a gymnasium was built. Soon, however, the lack of full accreditation for the college division began to be reflected in a decline of enrollment. In 1927 a concerted effort was made to meet the requirements for state accreditation. This goal was achieved. In order to preserve this status, President Lohrenz made the proposal to the conference of 1930 that the college be operated as a conference school. The conference, however, was not ready to accept this responsibility; this left the college with a very uncertain economic foundation. Economic insecurity continued to hamper the college program. The situation was further aggravated by the depression and its aftermath, a decline in student enrollment, the resignation of influential teachers, and hesitant support from the conference. In 1932-33, with less than 100 students and only six full-time teachers, the college lost its state accreditation.

At the General Conference of 1954 the conference educational program was reorganized. Under a unified board the U.S. Area Conference was made responsible to operate Tabor College, Pacific Bible Institute and the Mennonite Brethren Biblical Seminary. The seminary was moved from Tabor College to Fresno, California. The Board then initiated a Budgeted Giving Plan which provided the economic basis for an expansion of the conference educational program. Full accreditation of Tabor College became a major objective. In working toward that goal a long-range building program was inaugurated. When Frank C. Peters resigned in 1955, Leonard J. Franz was appointed president. Under his leadership the first project, a modern library, was completed in 1957. A completely new science department was developed on the first floor of the administration building in 1957. Dormitory facilities were improved, and on 25 May 1958, ground-breaking ceremonies initiated the building of a new student center and gymnasium, a fitting climax for the fiftieth anniversary. Since its beginning in 1908 over 4,000 students have attended Tabor College. The maximum enrollment was 422 in 1946-47. The 1958 enrollment was 290. The teaching staff has been increased to 30 members.

The Annual Bible Conference, running for eight days during the second semester, brings to the community outstanding Bible expositors. The Spiritual Life Emphasis Week, designed primarily for the college family, offers spiritual inspiration during the first semester. Mission and peace conferences are conducted periodically. Chapel services four times a week bring worship into the center of the curriculum. The College Chapel Hour is a weekly radio program, reflecting the testimony of a Christian college. It was started in 1953 and has been carried by 14 stations including HCJB, world-wide missionary station in Quito, Ecuador.

The controlling idealism of the school is well stated in its catalog: "Underlying the philosophy of a Christian Liberal Arts College is the concept that God is the controlling power in the Universe; that Christ is the Divine Mediator and Saviour of man, the fullest revelation of God and the directive in producing a wholesome standard of human conduct. The founders of Tabor College believed that the world and man can best be explained in terms of a Biblical orientation, and they believed that when this concept becomes the integrating force in a college, life becomes meaningful for the student, the faculty, the church, and society."