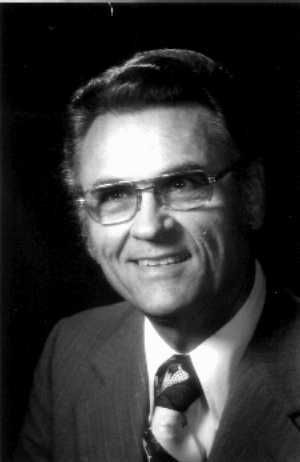 In 1929 Roy moved with his family to the Coldwater Mennonite Brethren community near Dalhart, Texas to engage in wheat farming; Roy began his elementary schooling in the Coldwater community. After several favorable years economic difficulties caused by several years of very sparse rainfall prompted Roy’s parents to move west again in 1934; after several months in Dallas, Oregon the family returned to the Reedley/Dinuba area of California. Roy was baptized on 20 June 1937, becoming a member of the Dinuba Mennonite Brethren Church. While living in Dinuba Roy worked with his father in the furniture business, graduated from Dinuba High School, and attended Immanuel Bible School for two years.

Roy attended Tabor College from 1942 to 1947, where he met Evelyn, a steady source of support in all of Roy’s endeavors. Before Roy began graduate studies the Justs spent a year in Five Points, California where he was principal and both he and Evelyn taught elementary school. More higher education followed: in 1948 the University of Kansas, Lawrence, awarded Roy the M.A. degree in sociology. His dissertation reflected interests he had developed at Tabor College—“Influences of Johann Cornies Upon the Major Social Institutions of the Mennonites of South Russia.” Roy continued his graduate studies at the University of Southern California where he received a Ph.D. degree in sociology in 1952. He wrote his dissertation on “An analysis of the Social Distance Reactions of Students from the Three Major American Mennonite Groups.”

In 1950 Just was invited to Tabor College, where he taught sociology and Mennonite history until 1955. He was well liked and deeply respected by students and colleagues. Many of his students recall his enthusiasm for learning, his promotion of cross-cultural understanding and his commitment to the idea that many professions or occupations are legitimate forms of Christian service. Roy left Tabor College in 1956 for Fresno City College, Fresno, California at least partially in protest of the Tabor Board’s earlier dismissal of President P. E. Schellenberg. He continued his teaching career at Fresno City College where he taught sociology and philosophy, and also occasionally taught courses at Fresno Pacific College during the period 1956–1962.

Just became president of Tabor College in 1963, a position he held until 1980. Many significant campus improvements were made during his tenure and the long-sought accreditation by North Central Association was achieved under his leadership. After years of financial crises he was able to lead the college out of its operational deficit. He was sometimes called a dreamer with contagious ideas, ideas that often came to fruition as a result of his enthusiasm and can-do attitude. During the ferment of the Just presidency students were introduced to radical Anabaptist thinking, faculty were encouraged to challenge students to meet high academic standards and a social work major was established.

During the years 1980–1985, Roy served as President of Columbia Bible Institute (CBI) in Abbotsford, British Columbia - a period which saw the development of a full partnership between the Conference of Mennonites in British Columbia and the British Columbia Mennonite Brethren Conference in the ownership and management of CBI. Just articulated an ambitious future for CBI, including the upgrading of the school to college status, formal application for accreditation with the American Association of Bible Colleges, the establishment of centers for Missions, Christian Counseling and Mennonite Studies, as well as the granting of baccalaureate degrees.

In addition to his long association with Mennonite educational institutions, Roy Just was known for his interest in missions and cross-cultural studies. His long and productive service to the Mennonite Brethren Church, as well as to the larger Mennonite/Anabaptist community, was graced by the warmth he expressed to all he met. He enjoyed storytelling, especially ones with bits of wisdom in Low German, and was widely known for his sense of humor.  A tribute written in 2010 by his daughters emphasized Just's effectiveness in inspiring others to see themselves as part of a global community, to take an affirming interest in all people, however different their culture, and to appreciate beauty wherever it might be found.