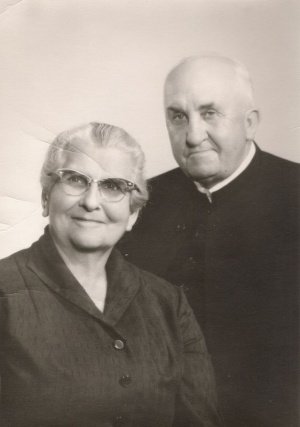 Ernest J. "E. J." Swalm: minister, bishop, evangelist and peace advocate in the Brethren in Christ Church; born 25 January 1897, near Duntroon, Ontario, Canada, to Isaac and Mary Alice (Sammon) Swalm, the former a minister and bishop in the denomination, the latter raised in the Mennonite Brethren in Christ church. The eldest of two children, Swalm had a sister, Pearl. On 21 January 1920, he married Maggie Steckley, born 6 March 1895. They had three daughters and one son. Maggie Steckley Swalm died 15 April 1984 and E.J. Swalm 12 August 1991.

E. J. and Maggie Swalm were both raised in the Brethren in Christ (Tunker) Church. On 12 June 1909 E.J. was baptized in a creek near Stayner, Ontario, by Bishop Charles Baker. Towards the end of World War I, the conscription legislation implemented by the Canadian government saw Swalm called to appear before the local military tribunal. When, as a conscientious objector, he refused to enlist and was imprisoned. He experienced verbal and even physical abuse at the hands of military officials. The intervention of Samuel F. Coffman and other Mennonite leaders resulted in his parole in July 1918. These experiences would instill in Swalm a life-long commitment to the doctrine of nonresistance, and engender deep friendships within Mennonite circles.

Shortly after his and Maggie's marriage, Swalm began his ministry in the Brethren in Christ Church. By 1929 he was elected bishop of the Nottawa District, succeeding his late father and becoming, at age 32, the youngest bishop in the denomination. Later he gained oversight for the Waterloo-Howick and Saskatchewan Districts in Canada and the Michigan and Indiana Districts in the U.S. When administrative changes divided the North American church into regional conferences in 1957, Swalm became bishop of the Canadian Conference, a post he held until his retirement 10 years later.

Swalm was active in the denomination in a variety of ways. A charismatic speaker, he was a popular evangelist, conducting more than 350 revival meetings in his lifetime. A vocal proponent of the peace position, he spoke extensively on the topic and also wrote Nonresistance Under Test (1938), recounting his World War I experiences. From 1940 to 1965 he served as chairman of the Peace, Relief, and Service Committee, among other boards and committees. He helped found Ontario Bible College (later Niagara Christian College) in 1931, and chaired its board for 15 years. He was moderator of the General Conference nine times, and delivered the conference sermon twice.

With an ecumenical spirit ahead of his time, Swalm also served outside his denomination. Deep friendships emerged from his 25 years as the chair of the Conference of Historic Peace Churches (1940-65), which negotiated conscientious objection privileges with the Canadian government. During World War II he made many trips to the Alternative Service Work Camps to provide pastoral support and encouragement to conscientious objectors. He helped to establish Mennonite Central Committee Canada in 1963; and represented the Brethren in Christ on the Presidium of the Mennonite World Conference during the 1950s and 1960s. In 1964 he became a founding member of the Evangelical Fellowship of Canada.

Swalm's active public life and frequent travel were difficult for his family. Maggie managed the farm and family with her own skills and positive spirit. This home support made Swalm's public ministry possible.

Swalm’s gracious spirit, keen wit, and deep spiritual insight made him an effective minister and bishop, but his greatest legacy lies in the generations of Brethren in Christ people who credit him as an important influence on their decision to choose the Christian way of peace.

Swalm, Ernest J. Nonresistance Under Test: The Experiences of a Conscientious Objector, as Encountered in the Late World War by the Author. Kitchener, Ont: Cober Printing Service, 1938.