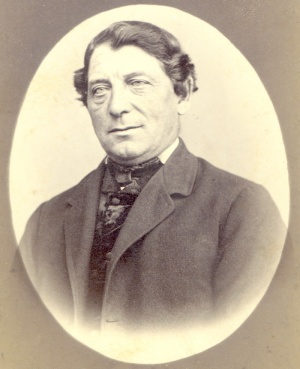 Leonhard Sudermann: elder of the Berdyansk Mennonite Church, Russia, one of the chief promoters of the Mennonite migration to America, and elder of the Emmaus Mennonite Church, Whitewater, Kansas; born at Goldschaar-Heubuden, near Marienburg, West Prussia, on 21 April 1821, the youngest of fourteen children of Abraham Sudermann (1763-1840) and his second wife, Anna (von Riesen) Sudermann (1778-1851), (see additional Information for further information regarding Leonhard's family).  Leonhard was baptized in 1838 in Heubuden. In 1841, after his father had died, he and his mother migrated to Russia where eight of the children had already gone. On 23 October 1842, he married Marie Sudermann and settled in Berdyansk in 1843. In 1859 he was elected minister of the Berdyansk Mennonite Church to replace his father-in-law, Abraham Sudermann, and in 1865 he became elder of the church.

Cornelius Jansen, a member of Sudermann's congregation, was his close friend. Both men became great promoters of the migration of the Mennonites to America when they found out that certain privileges, particularly those pertaining to military service, were to be withdrawn. Sudermann was one of the delegates sent to St. Petersburg to learn how the new military law would affect the Mennonites. He was sent a second and a third time in 1871. In 1873 he was delegated to go to America with eleven others to investigate settlement possibilities for Mennonites from Russia and Prussia. Eine Deputationsreise is Sudermann's detailed report about this journey. After his return to Russia he reported his findings and helped people with their emigration.

In 1876 Sudermann immigrated to America, spending the first six months in Summerfield, Illinois. In 1877 he settled in Butler County, Kansas, where some Prussian Mennonites had just organized the Emmaus Mennonite Church. He served this congregation as elder to the end of his life. He was also active in Conference work. He died on 27 January 1900 in Whitewater, Kansas.

Sudermann kept records of all his trips to America and St. Petersburg and kept a diary. This material as well as his letters show that he was a very conscientious and diligent worker. (Most of the materials are found in the Mennonite Library and Archives (North Newton, Kansas)

Krehbiel, H. P. History of the General Conference of the Mennonites of North America. Canton, 1898: 444.