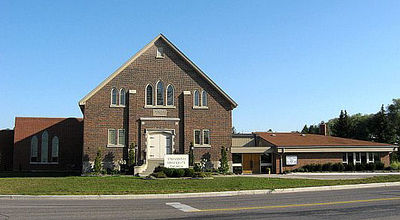 In 1822 Christian Nafziger, an Amish layman from Bavaria, Germany, appeared in the pioneer Mennonite settlement in Waterloo. Living conditions in Bavaria were very difficult. He left his family, set out with little more than his walking stick, faith and hope to find something better in North America. The Dutch Mennonites answered his plea for help. He left Amsterdam Christmas Day 1821 on a sailing vessel bound for Philadelphia. For some unknown reason he arrived in New Orleans on 2 March 1822. With further Dutch assistance he continued his journey up the Mississippi River to Ohio and overland to Lancaster County, Pennsylvania. The leaders there advised him to go to Canada for cheap land, and supplied him with a horse and provision for the trip. With the help of the Mennonites in Waterloo (who had earlier emigrated from Pennsylvania) he contacted the Lieutenant-Governor of Upper Canada in August 1822 and asked for land for 70-80 Amish families from Europe. The Lieutenant-Governor offered 50 acres of free land for every immigrant family. Waterloo Mennonites set up a committee to help plan for a new settlement immediately to the west in a "German Block."

Probably because of their family involvement in land purchase in Canada in 1807, Bishop John Stoltzfus and Minister Christian Koenig were sent to Waterloo by horse-drawn carriage to organize the new immigrants into an Amish Mennonite congregation in 1824. Two ministers and a deacon were ordained to meet the spiritual needs of a pioneer settlement. For sixty years the Amish met in their homes for regular worship and became known as the Wilmot Amish Mennonite Congregation. In 1884 they built their first "Mennonite style" meeting house at Steinmann's corner where the church is still located. The next year an identical meeting house was built on Erb's Rd. west of St. Agatha. Sunday services alternated between the two meeting houses for many years but in 1957 St. Agatha Mennonite and Steinmann's became separate congregations.

Roth, Lorraine. The Amish and Their Neighbours: the German Block, Wilmot Township, 1822-1860. Waterloo, ON: Mennonite Historical Society of Ontario, 1998.

Steinmann Amish Mennonite Church, located one mile west of the village of Baden on Highway 7 and 8, in Waterloo County, Ontario, is a member of the Ontario Amish Mennonite Conference, and with the St. Agatha congregation had a combined membership of 520 in 1957. The congregation, first called Wilmot, was organized about 1826.

In 1822 Christian Nafziger, of Bavaria, Germany, purchased land in Wilmot Township for settlement; he returned to Germany and brought his family and others of his congregation to Canada. During his absence a number of families from Pennsylvania moved to Wilmot and a congregation was organized. Most of the settlers however came directly from Europe, mostly Alsace and Lorraine. Names of some of the early settlers include Fahrni, Roth, Litwiler, Gardner, Miller, Gingerich, Steinman, Wagler, Oesch, Lichti, Gascho, etc.

The congregation worshiped in homes until 1884, when the Steinmann meetinghouse was built. A year later another church was built one-half mile west of St. Agatha, and services were held alternately in the two buildings until 1939. Since then services have been held every Sunday in each church. The old Steinmann church, a white frame building, was removed and replaced in 1946 by a new brick structure, with a seating capacity of 600. Pennsylvania-Dutch is still spoken at home, but church services are all in English.

The congregation is active in the support of missions, evangelism, and church schools.

The ministers serving the congregation in 1958 were Moses O. Jantzi and Orland Gingerich, bishops; Peter Nafziger and Elmer Schwartzentruber, ministers.