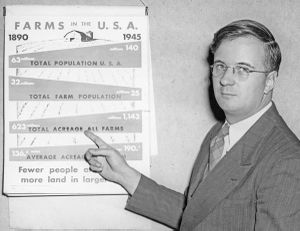 Lloyd graduated from Iowa State University in 1936, earned a Master's degree at the University of Wisconsin in 1938 and a PhD from the University of Minnesota in 1949 in agricultural economics. He worked several years beginning in 1938 for the U.S. Department of Agriculture (USDA) before being drafted to serve in World War II in 1942. It was while working at the USDA that he met and married Blanche.

During World War II, Lloyd registered as a conscientious objector. Raised a Methodist in an area unfamiliar with peace-church philosophy, he was classified as 1-A and after exhausting all options through a year of appeals and refusing to report for military duty, he was sentenced to prison and served a brief time in Sandstone, Minnesota, federal prison. He was paroled to the Civilian Public Service camp at Hagerstown, MD, but soon went to the Brethren Relief Center in New Windsor, Maryland. Immediately after the war he served with the National Service Board for Religious Objectors in Washington, DC. He also pursued postdoctoral studies at the London School of Economics.

In 1947 Spaulding was hired by Bethel College and taught economics at Bethel for 30 years, serving as chairman of the Social Science Division for a period of time. During the early 1950s he left Bethel and served for four years, 1952-56, as the Executive Secretary of the American Friends Service Committee in Wichita and was director/dean of the Institute of International Relations, which Friends University had taken over from Bethel College. In 1956 he returned to Bethel.

Spaulding was influential in the establishment of the social science seminar program at Bethel. A dedicated teacher who loved learning and students, he set high standards for himself and challenged students to do the same for themselves. After retiring, he enrolled in 20 courses at Wichita State University.

As a member of Bethel College Mennonite Church, North Newton, he had served as chairman of the Church Board and Sunday school superintendent. He had a wide interest in peace activities. He was secretary of the Kansas, Oklahoma, Colorado region of the American Friends Service Committee. He also became involved with a variety of economic studies of the communities of Newton, Hesston, and Moundridge and also with CURB (Citizens Utility Ratepayer Board) and other consumer advocacy groups.

Blanch Spaulding served for many years as the librarian of the Western District Conference library on the Bethel campus and was much sought after as a speaker on children’s literature and teaching children in the church. For several years she taught courses on children's literature at Bethel College.