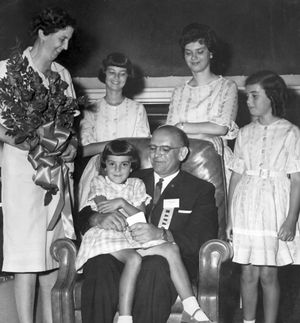 When Roy was 11 years old his family left the Old Order Mennonite church and began to attend the St. Jacobs Mennonite Church where Roy was baptized at age 16 following a series of evangelistic meetings. Upon his marriage to Clara, he joined the Erb Street Mennonite Church in Waterloo.

During the World War II Roy Snyder did alternate peace service by working on a farm, and then in 1946 began to work in the field of artificial insemination with the Waterloo Holstein Breeders Association. This pioneering agricultural association was the first in the world to use 100 percent frozen semen, which allowed for cattle semen to be exported throughout the world and help breed livestock that fed many people. In 1974 Snyder became one of the founders of Semen Exports Canada, later Semex Alliance.

Snyder’s work with cattle breeding took him to over 80 countries. Although Snyder was firm in his Anabaptist-Mennonite Christian faith, he was very tolerant of people of other faiths and made close friendships with people of other religions. He would comment on the many times he had changed his thinking about a variety of issues over the years, and expected to continue to change.

Snyder is known to have stressed the vital importance of the virtues of Ambition, Ability and Attitude, with attitude being the most important attribute. Roy completed grade eight, but continued to be a lifelong learner and an avid reader. His irenic spirit, kindness and gentle sense of humor were much appreciated as he helped his congregation and the church agencies with which he served make good decisions and negotiate changes. At the same time he was never afraid to ask the hard but necessary questions, share his position openly, and voice his concerns. As he grew older his mind remained alert right to the last week of his 99 years. Roy Snyder stated in his last years that he did not want to be a burden on anyone. That was an amazing statement from a man who used his intelligence and abilities to benefit many people throughout his life.

Snyder, Roy G. It Was all worthwhile: the life and times of Roy and Clara Snyder. Markham, Ont. : Pennsylvania German Folklore Society of Ontario, 2010.