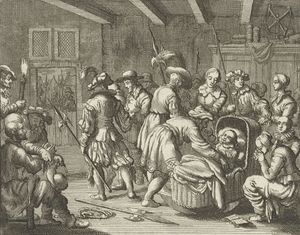 Hans (Hänsel) Schmid, also called Raiffer, probably because he was born in the Tirolean village of Raiffach, a Hutterite leader and martyr (d. 1558), successful missioner, composer of hymns, writer of letters and doctrinal tracts, a strong and leading personality, one of the noblest representatives of the second period of Anabaptism. His date of birth and conversion are not known. In 1548 (a period of severe persecution in Moravia) he was made minister and four years later was confirmed in this office. Soon thereafter he began his successful mission work in Germany: in 1555 he was in Hesse (district of Nidda), in 1556 in the Rhenish Palatinate around Kreuznach and Worms, where he won over a group of "Swiss Brethren" to the Hutterite way after long and serious debates, and in 1557 he worked along the Lower Rhine and around Aachen, winning the important Swiss Brother Hans Arbeiter and other Swiss Brethren, most of whom now moved to Moravia like those from Kreuznach. Next his work led him into the Eifel district of Western Germany and again to Aachen. Here, on 9 January 1558, during a meeting, he was surprised by city authorities and together with five brothers and six sisters (all of the former Hans Arbeiter group) he was imprisoned.

On the events between 9 January and the day of his execution, 19 October, there is much detailed information thanks to the 35 extant letters and the 15 hymns written in prison, which material the Chronicle used for its graphic account. Raiffer had cherished some hope of finding leniency at the hands of the City Council, but of the twelve Anabaptists imprisoned five men were finally executed, the sixth recanted and was thereupon released (he returned to Moravia, repented, and was reaccepted by the Brethren), and the six women were flogged and driven out of the city. At one time all twelve were allowed to be together from 4 a.m. to 10 p.m., but then were separated again in different prisons. They sang overly loud as often as they could to comfort each other (see Singing, Hutterite), and they wrote letters to each other between their confinements, as well as letters to the Rhineland Brethren and those in Moravia. Schmid was badly racked but remained steadfast, defending his faith courageously and helping others to do likewise. Of his 35 letters from prison 15 were addressed to his "marital sister" (wife) Madlen (Magdalena) in Moravia. Apparently messengers could communicate freely with the prisoners. A wealthy woman in Aachen sent them extra food, but Schmid refused it unless she would change her mind and allegiance. All attempts to persuade him failed as they did with nearly all Anabaptists; accordingly the city authorities finally had to obey the imperial mandates issued by the "new" emperor Ferdinand I. In October 1558, all five brethren were publicly strangled and then burned.

Of this unusually strong personality we get a vivid picture from his numerous writings, which places him on the level of Peter Riedemann.

Letters - The letters are found in many Hutterite codices, which proves their popular appeal. Of the 37 letters the 35 written in Aachen are described above (excerpts of one are to be found in Wolkan's Geschicht-Buch, 292, note). Seventeen of these were published in a book edited by Robert Friedmann. One letter (perhaps of 1557), written to Romies Caltenburg and dealing with the Incarnation, is extant in a codex in Bratislava. Schmid discussed this topic several times (Chronik, 384 and 387), repeating more or less the Nicene Creed. One letter of 1555 (now in Darmstadt) written to the Rentmeister of Nidda (Franz, 332-36) contains a defense against slander and a sort of summary of Anabaptist teaching.

Doctrinal Writings — Of Schmid's doctrinal writings the following are known: (A) Eine Rechenschaft vom Abendmahl und seiner rechten Bedeutung, written in prison in Aachen and sent to his fellow prisoners as well as to the Brethren in Moravia, obviously a repetition of his oral defense before the authorities. This document (published in Glaubenszeugnisse II, as No. 12) has two parts: (a) a defense of the Zwinglian theology of the Lord's Supper (the symbolical interpretation); (b) Vom rechten Gebrauch . . ., which explains the idea of community (Gemeinschaft) both with Christ and with the Brethren (excerpts of this tract in Wiswedel, Bilder III, 97-99). (B) Brüderliche Vereinigung zwischen uns und etlichen Schweizer Brüdern (1556), containing the debate with Lorenz Huef and others at Kreuznach, a statement of the Hutterite position in seven articles (Chronik, 361-66) in which the main differences from the Swiss Brethren position are formulated. Andreas Ehrenpreis reprinted this piece in his Sendbrief of 1652. The article concerning marriage and divorce is very informative, and so is the one concerning ministers and their special honors (see Ministers, Hutterite, etc.). (C) One year later Schmid discussed 17 articles with Hans Arbeiter, the titles of which are named but their contents not published. Here we find also two theological items: Concerning Original Sin, and Concerning the Incarnation of Christ. One may safely assume that Schmid's views coincided with those of Riedemann.

Hymns — The Liederbuch der Hutterischen Brüder (pp. 551-611) contains 15 hymns by Schmid (hymn No. 3 is not by Schmid but about him), and six hymns by his co-prisoners, most of them of great beauty and depth. Wolkan (211-28) discusses them at great length, reprinting five of them in full, and claiming that with Schmid and Riedemann Hutterite hymn composition reached its climax. Wiswedel (99, note 5) claims that Schmid composed 24 hymns, but does not report further. One hymn is printed by Wackernagel, Kirchenlied III, 812. One hymn, "O herre Gott vom Himmelreich merck auff und sieh die worte . . . ," composed by Schmid and Jörg von Ingenheim, is found in the rare German hymnal Ein Schon Gesangbüchlein. The main theme of all these hymns is love, obedience to God, community, and Gelassenheit, a key attitude of the Anabaptists. Of particular beauty is hymn No. 4, "Fröhlich so wollen wir singen," a deeply felt praise of Christian love. Many a hymn shows the typical Anabaptist acrostic—a hidden message composed by the first words of each stanza. (For details see Chronik, 385 note.)

The names of the brethren who were martyred with Schmid are Heinrich Adam, Hans Weckh, Matthias Schmied, and Tillman Schneider.

Braght, Thieleman J. van. The Bloody Theatre or Martyrs' Mirror of the Defenseless Christians Who Baptized Only upon Confession of Faith and Who Suffered and Died for the Testimony of Jesus Their Saviour . . . to the Year A.D. 1660. Scottdale, PA: Herald Press, 1951: 588-90. Available online at: http://www.homecomers.org/mirror/index.htm.