Ministry to the poor and homeless has long been part of the church's witness and reached a new level of development in 18th-century Pietism (Halle orphanages and schools) and in the response of 19th-century German, English, and North American Christians (e.g., the Salvation Army in London, 1865-78) to the new poverty of the Industrial Revolution. The first North American rescue mission was founded by Jerry McAuley in October 1872 at 316 Water Street, New York City. Five years later on 15 September 1877, Colonel Clarke's Mission (later Pacific Garden Mission) opened its doors at 386 South Clark Street in Chicago. These missions were evangelistic in nature but also provided food and lodging for street people and transients.

Since Mennonites were rural people they did not begin urban missions until the turn of the 20th century. In fact they were slow in starting missions anywhere. Between 1893 and 1910 a number of city missions were begun. While these missions were not rescue missions in the conventional sense, most of them did some social work. For example, the constitution of the Mennonite Gospel Mission (MC) in Kansas City, Kansas, founded in 1905, called for workers to provide clothing and food for the worthy poor, provide free medical aid for the afflicted poor, and put homeless children in Christian homes.

Many years before the General Conference Mennonites began city missions some members from Pennsylvania helped in New York City missions sponsored by other churches. Others were more aggressive in starting missions. The Fort Wayne, Indiana Rescue Mission was actually founded and organized in 1903, by two Mennonites (Witmer and Stuckey) from the Berne Mennonite Church (GMC). During the early years the Berne congregation largely supported this work financially. Later support for the Fort Wayne Mission was taken over by others.

In 1910, E. F. Grubb (GMC) of Wadsworth, Ohio, opened the River Street Mission in Los Angeles, which, in addition to conducting meetings, classes, and visitation, gave food and clothing to the poor.

In 1914 a General Conference work headed by W. W. Miller of Pulaski, Iowa, was opened in a hall in Chicago. After some time it was felt that the Mennonite people "were better adapted to take up a suburban district and build a church there and do real organizing and permanent work, instead of doing the so-called rescue work among the transients." The General Conference people were also suspicious of the revivalist methods used in rescue mission work. 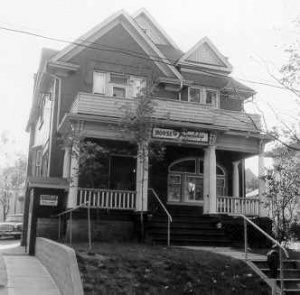 House of Friendship (Kitchener) in 1959.

One of the more inclusive and active Mennonite rescue missions is the House of Friendship on Charles Street in Kitchener, Ontario. It was founded in 1939. This mission offers more than 16 different services and ministers to 18,000 persons annually. In 1987 the House of Friendship approved a $3.5 million project to purchase a half acre of inner city property, on Erb Street, to "provide permanent housing for those left out." The mission is sponsored by congregations belonging to the Ontario Mennonite Brethren Conference and the Mennonite Conference of Eastern Canada (MC, GCM). It is now an self-governing organization that also has broad-based community support.

The Maison de l'Amitié (House of Friendship) in Montreal, Quebec, was opened in 1973 and is sponsored by Mennonite Central Committee Canada and the Mennonite Conference of Eastern Canada. It gives aid to refugees, holds workshops, visits prisoners, and operates camps and a day care center. It is not a rescue mission in the traditional sense.

The Hope Rescue Mission in South Bend, Indiana, was begun by the Mennonite Board of Missions (MC) in 1954 but in 1987 was governed by a community board of directors, including a number of Mennonites. The Rock of Ages Mission, Portland, OR (MC), which operated from 1952 to 1982 , was sponsored by the Pacific Coast Mennonite Conference. The Brethren in Christ have a rescue mission in San Francisco, California. Recently (by 1987) they discontinued the feeding and housing of transients, and began focusing on abused women and unwed mothers.

The ministry of most rescue missions has changed in the 1980s. They assist not only men who come off the streets but women and children as well. The missions have added services in suicide prevention, drug and alcohol control, psychiatric and emotional treatment, nutritional awareness, and recreational activities.