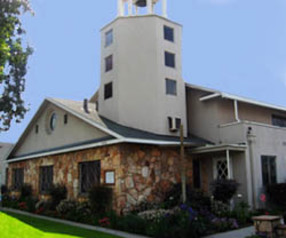 In 1908 the Pacific District Conference of the General Conference Mennonite Church passed a resolution which called for exploring the possibility of opening a mission in Los Angeles, California. This recommendation, submitted to the General Conference which met later that year in Beatrice, Nebraska, was adopted and $500 was set aside for this project. In preparation for this new venture, the Home Mission Board of the General Conference asked Elmer F. Grubb of Wadsworth, Ohio, to organize the new venture. River Street Mission at 1432 San Fernando Street opened its doors to the public in 1910, and the first meeting was attended by 12 persons. Attendance soon increased to 30, and in 1912 the Home Mission Board concluded that a more suitable location should be found; accordingly, a building and lot were purchased at Avenue 19 and Albion Street and dedicated as the Whosoever-Will Mission. On 21 February 1915, the group organized as the Whosoever-Will Mennonite Church with 12 charter members.

On 2 November 1924, after a new church and parsonage were completed at the corner of 79th and Stanford Streets in Los Angeles, Immanuel Mennonite Church was organized and dedicated. Growth of the congregation made additional space necessary, and in 1928 an annex was built.

In 1951 the congregation moved to a new location at 10355 South Paramount in Downey, a city southeast of downtown Los Angeles. The first phase of construction included a large structure which provided worship and fellowship facilities, with additional rooms to accommodate Sunday school and a pastor’s study. A dedication service was held on 6 July 1952. John B. Graber was engaged as pastor in that year, and soon construction of expanded church facilities began. Upon completion, the expanded campus provided 20 rooms for Sunday school and Christian Endeavor purposes with a fireside room, a room for the church council, the sanctuary, and a nearby parsonage. Dedication services were held on 16 January 1955.

In 1956, following some disagreements, a number of members withdrew and formed Bethel Community Church; Immanuel Mennonite Church retained 142 members. In July 1956 Albert Epp, a senior at Fuller Theological Seminary, was appointed as interim minister. A year later he was ordained and continued to serve as pastor. Under his ministry, membership grew to 197 with a Sunday school attendance of 232 in 1960.

Epp served as pastor until 1969, when he entered a doctoral program at Fuller Theological Seminary. He was succeeded by interim pastor Douglas Friederichsen, and in 1970 Robert Gerhart assumed the pastorate. When he retired in 1974, he was followed by five pastors during the next decade. The community was undergoing some cultural changes, and some members moved elsewhere.

In 1978 the Immanuel Mennonite Church withdrew from the General Conference Mennonite Church and renamed itself the Downey Immanuel Church. For several years the congregation functioned independently, until 1985, when it affiliated with the Pacific District Conference of Mennonite Brethren Churches. Shortly thereafter the church changed its name to Living Hope Church.

In 1988 Glenn Koons was chosen as pastor and for almost two decades he provided a measure of stability. The congregation carried on an outreach program that touched a number of younger people and children. Wednesday evening services and Christian Endeavor helped the congregation to attract more community persons.

In the following year Don Waggoner, pastor of a new work, Abundant Life Christian Center, was invited to become the new pastor of the Downey Living Hope Church. He accepted the call with the understanding that the two congregations would merge. The name now chosen was Abundant Hope Christian Center. Efforts to reach the community were strengthened and by 2008 membership had grown to 79. Some community groups also rented facilities and a school, with about 175 students, held classes here regularly.

Burkholder, H. D. The Story of Our Conference and Churches. North Newton, KS: The Historical Committee of the Pacific Conference, 1951.

The Immanuel Mennonite Church (General Conference Mennonite), located in Downey, Los Angeles County, California, was organized with 35 charter members as the Mennonite Mission Church on 12 May 1918 at Avenue 19 and Albion Street, Los Angeles. On 2 November 1924 it was organized under the Immanuel Mennonite Church name, and a church was dedicated at 79th Street and Stanford Avenue, Los Angeles. On 4 July 1953 it moved to the present location at 10335 Paramount Blvd., Downey. The membership in 1955 was 271. It became a member of the Pacific District Conference in 1919. The following ministers served the congregation from 1924 to 1953: Albert Claassen, H. B. Dirks, D. D. Eitzen, Albert Jantzen, Wilbert A. Regier, Paul Bauman, H. D. Burkholder, Alfred Regier, and John B. Graber. -- Harold D. Burkholder, Vol. 3, p. 13 (1957)