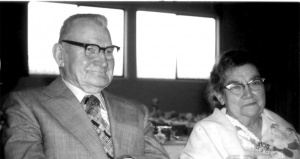 David and Louise Rempel were successful dairy farmers, known for their generosity in helping Mennonite immigrants become established in Canada. David John Rempel, the oldest of 10 children, was born to John D. Rempel and Katarina (Abrams) 14 November 1894 in Jekaterinowka (Ekaterinovka), South Russia. He was baptized in 1914 by Abram Unruh into the Jekaterinowka Mennonite Church. On 6 May 1918 he and Louise Buhler (14 August 1894 - 23 February 1985) were married. They had six children, two of whom predeceased their parents.

David Rempel was drafted into the White Army on 19 December 1919. After two years of military service, he together with 48 other refugees, managed to escape from the Soviet Union via Constantinople. This group came to be known as the "49ers" or "Constantinoplers," and in Canada would meet for periodic reunions.

Rempel was able to make his way to Germany, where he worked on the Heinrich Bartel estate, never imagining that some 25 years later he would be helping several of Heinrich Bartel’s children, including the Siegfried and Erna Bartel family, to settle in Canada. In September 1923 his wife Louise and their first-born son were able to join him in Germany, arriving on a cold, rainy night in Bremerhaven. Unfortunately, David did not know at which harbor his family was arriving. Not knowing what to do, Louise purchased a wheelbarrow with her remaining money. Forlorn, she began making her way into the city, only to see a stranger walking in her direction. Miraculously, it was her husband David.

In 1927 the Rempels migrated to Canada on the SS Montreal, settling first in Saskatchewan. In February 1928 they were among the first group of Mennonites to pioneer in Yarrow, BC. David Rempel was re-baptized by John A. Harder and joined the Yarrow Mennonite Brethren (MB) Church on 25 July 1937. The Rempels were active in several church ministries including volunteer service to the Bible School and Columbia Bible Camp (now Stillwood). After some difficult pioneering years, the Rempels moved to the Sumas Prairie in 1946 where they purchased a 100-acre farm, known as Ridgetop Dairy. In 1953 they began attending the Arnold Mennonite Brethren Church. Three years later they retired to Abbotsford, and transferred their membership to the Central Heights MB Church.

David Rempel died on 16 May 1977 at age 82 with funeral services conducted by Herman Lenzmann in the Yarrow MB Church. His wife Louise died 23 February 1985. Her memorial service took place at the Clearbrook, MB Church. She is buried in the Hazelwood cemetery.