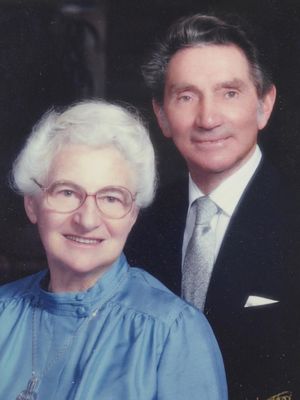 In 1922 Siegfried’s mother and brother Walter died in a tragic train accident. Three years later Heinrich married Johanna (Wiehler) Andres, a widow with one daughter, in 1925. Two children were born from this union (one died in infancy).

Siegfried grew up on several farms throughout Prussia, beginning in Elbing. Siegfried’s father Heinrich excelled in farming. After he had completed his grade eleven equivalent, Siegfried took agriculture management courses in hopes of continuing his own interest in farming. Siegfried was baptised in the Thiensdorf Mennonite Church on 15 May 1932.

Siegfried’s plans to farm were interrupted in 1936 when he joined a non-combatant military training program. Bartel ended up serving seven years as a Captain in the German army, including during World War II. It was during this time that the spark of peace and justice began to emerge in his world view.

Mennonite Central Committee workers connected with the Bartel family, who had been displaced at the conclusion of World War II, and the Bartels decided to immigrate to Canada in 1951. Upon arriving in British Columbia, they took up residence in the Sumas Prairie and later in Agassiz, where Siegfried was recognized as a very successful dairy farmer until his retirement. He spent the final years of his life at Menno Home in Abbotsford, where he celebrated his 100th birthday in 2015.

Bartel demonstrated a strong commitment to the church, beginning in Prussia and in several congregations upon arriving in Canada, including Agassiz Mennonite Church, Harrison Gospel Chapel, and Eden Mennonite Church in Chilliwack. In the later he was a senior Sunday school teacher for many years and congregational chair. Siegfried was also engaged in and supportive of the Conference of Mennonites in British Columbia.

Beyond being a churchman, Bartel generously participated in community life, including serving as chair of the Agassiz-Harrison School Board for nine years, a member of the Mennonite Benevolent Society Board (1966-1971), and a member of the BC Parole Board.

In 1970 Bartel began two decades of leadership with Mennonite Central Committee British Columbia. He began his initial involvement on the MCC BC board and eventually became chair. Under his leadership MCC BC went through a time of significant growth, beginning with the move of MCC BC from the Yarrow clothing center to offices in Abbotsford. During his tenure, new programs emerged including ministries for mentally challenged people, leading to the formation of MCC Supportive Care Services (now Communitas). In addition, local relief sales were launched, thrift stores were established, the MCC BC Housing Society was started, and personnel were added to develop ministries for and with aboriginal neighbors. During his time with MCC, Bartel also served on the boards of MCC Canada in Winnipeg and MCC Bi-National in Akron, PA.

Siegfried Bartel will be remembered for his commitment to peace. This journey began as a young boy in Prussia when he observed his father extended grace to a man whose drunken negligence caused a train accident that resulted in the death of his mother and oldest brother. His years as an officer in the German army led to his conclusion that pacifism was the only sane response to killing and war. This discovery only became stronger in the following years. Through his involvement in the church and MCC, Bartel was a tireless advocate for the needy and disadvantaged, whether the refugee, the homeless, or the oppressed. His witness was one of expressing care for fellow human beings, firmly rooted in his understand of the Mennonite faith and convictions.