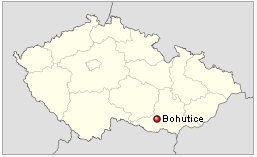 Bohutice (German: Pochtitz, Bochtitz), a village and estate in the parish of Wolframitz near Kromau in the South Moravian Region. Because of a strong influx of Anabaptists, the Hutterian Brethren, after establishing a Bruderhof at Gopschitz (see Gobschitz), bought a house "on the heath" in Bohutice in 1545-1546 of Gallus Kusy von Mukodel and settled in the domain of the Kusy von Mukodel family; soon afterward they acquired a mill in Klein-Selowitz. During the time of persecution they had to abandon this Bruderhof but re-established it in 1560.

Whereas they had been favored by Stefan Kusy, their position deteriorated under his son Hans to such an extent that an open break occurred. On 13 April 1597, Kusy's men entered the house and severely damaged it, compelling the Brethren to leave on the following day, with their "aged, wid­ows, and orphans and little children," losing all their possessions. The chronicles estimate the loss, including unpaid wages due for more than a year, at 5200 florins. The baron soon discovered his loss in their departure, and "upon his repeated desire and persistence" they returned in 1598.

In 1602 Gopschitz was abandoned "with the good will of the baron," but the Bohutice Bruderhof re­mained. In 1605 it suffered at the hands of the Altheim regiment, in 1610-1611 through the misman­agement of Georg Riedel, who purchased the grain too late (see Pellertitz). On 1 August 1619, it was "hard plundered" by Dampierre's troops; on 19 December 1620, Spaniards, Neapolitans, French, and Polish soldiers behaved so barbarously that the Brethren decided to flee.

After some time the refugees returned to Bohutice, where on 26 August 1621, the preacher Konrad Blösi died. On 5 January 1622, the imperial troops, com­posed of all kinds of rabble, burned down the dwelling house; the remaining buildings were plundered and burned 10 days later by cavalry from Lower Austria. The Brethren, driven out by these acts of violence, did not return; the settlement was abandoned.