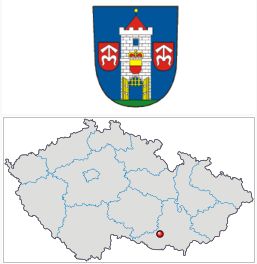 Kromau (Czech, Moravský Krumlov) is a town (pop. 6,000, 2005 est.) in western Moravia, of German and Czech stock. During the Reformation it was the center of the domain of Berthold von Lipa, who also possessed the Göding domain. In both domains he favored Anabaptism, so that several Bruderhofs arose here. By orders from Vienna he was compelled to expel them in 1534; but in 1545, 46 new settlements were made at Kromau, Rackschitz, Schackwitz, Gurdau, Kobelitz, Pavlovitz. During the persecution of 1550 they had much to endure, and some had to leave temporarily, but later were permitted to develop undisturbed. In 1622 the Bruderhofs here suffered severely at the hands of imperial troops; 500 men of the Löbel regiment were quartered in Kromau and Eibenschitz (Ivancice). The confiscated domain became the property of Gundakar von Liechtenstein.

The Bruderhof at Kromau was paid a visit in 1620 by King Frederick of the Palatinate on his way to Brno. He writes about it to his consort on 6 February, saying that the Brethren had given him specimens of their artistic products, including a splendid iron bedstead, a quantity of knives, and beautifully stitched gloves; for the queen they had given him very lovely china (see Ceramics); if they were living nearer Prague he would visit them frequently.