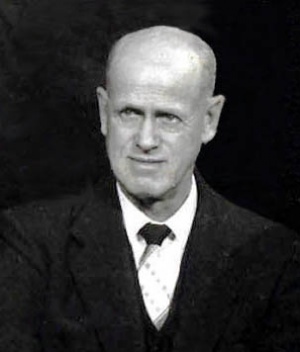 Jacob Peter Penner: teacher; born on 20 March 1898 to Peter David Penner (27 January 1862, South Russia - 22 September 1946, Chilliwack, British Columbia, Canada) and Susanna (Janzen) Loewen Penner (5 March 1860, Neuhorst, Chortitza, South Russia - 17 December 1931, Hepburn, Saskatchewan, Canada), pioneer homesteaders living about 6 miles west of Rosthern, Saskatchewan. They immigrated to Manitoba in 1892 and were members of the Winkler Mennonite Brethren Church before moving to Saskatchewan in 1894. Susanna was previously married to Abram Loewen (d. 1884, Rosenthal, Chortitza, South Russia), by whom she had one daughter that survived infancy. Jacob was their last child and only son who survived childhood. Jacob had two sisters and a half sister. The family attended the Laird Mennonite Brethren (MB) Church, until they moved to the Hepburn community where they attended the Hepburn MB Church. Jacob was married on 28 July 1927 in Hepburn, Saskatchewan to Kathryne Warkentin (1 February 1904, Friedensfeld, Zagradovka, South Russia - 22 December 1987, Chilliwack, British Columbia, Canada), daughter of David Warkentin (1876-1943) and Katherina (Martens) Warkentin (1875-1931). Jacob and Kathryne had five children: Arthur, Velma, Wilfred, Orpha, and Samuel.

In his 18th year, Jacob attended a series of revival meetings in Dalmeny, answered an altar call, and became a new person in Christ. This conversion fully changed his direction in life. After being baptized in August 1916 and becoming a member of the Hepburn congregation, he left his farming career to prepare for the preaching ministry. He was strongly encouraged in this by church leader P. J. Friesen. After completing his junior matriculation requirements at the German-English Academy in Rosthern in 1921, he enrolled in the Provincial Normal School and earned his teaching credentials. Subsequently, he completed his senior matriculation by correspondence, and took further summer courses at the University of Saskatchewan.

From 1922 to 1927 Jacob taught at the Hudson Bay School east of Hepburn; from 1927 to 1934 at King George School, near Borden; from 1934 to 1940 at Brotherfield School, west of Waldheim; and from 1940 to 1945 at Clear Spring School (a two room school in the Great Deer community, near the Borden MB Church, offering grades 1 to 12) as senior teacher. That concluded his teaching career in Saskatchewan public schools. In summer 1945 the Penner family moved to East Chilliwack, British Columbia to begin a family farm. However, money was in short supply and the organizers of the new Yarrow private school needed another teacher. Jacob accepted their offer and taught at the Sharon Mennonite Collegiate Institute (SMCI) from fall 1945 to summer 1948. Then, to augment his family income, Jacob taught in the newly formed East Chilliwack MB Bible School for 5 months a year, until 1952.

While Jacob was a student at the German-English Academy, the principal, C. P. Krueger, mentored and encouraged him in developing his own systematic personal Bible study. In the 5 years that he taught school near Hepburn he frequently served in the pulpit, and was a favored preacher at many weddings. For the remainder of his life he assisted in the pulpit ministry of the local MB Church wherever he resided. Upon the recommendation of the Borden MB Church, Jacob and Kathryne were ordained to the pulpit ministry by the Brotherfield MB Church in 1935. For several summers after that, Jacob and a partner were assigned by the regional MB Conference to evangelize surrounding unchurched communities. Later in British Columbia he shared in the pulpit ministry in the Yarrow, East Chilliwack, and Broadway Mennonite Brethren Churches. Jacob's sermons were never long or dull: He used his large repertoire of memorized English and German poetry and humorous anecdotes to embellish them.

On 19 September 1988, eight months after his wife Kathryne died, Jacob passed away in Chilliwack, British Columbia.