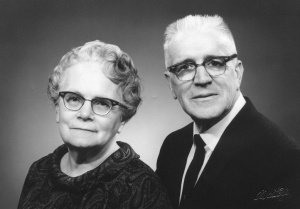 Jacob P. Penner: educator and pastor; born 2 December 1901, in Rosenthal, Chortitza Mennonite settlement, Russia, to Peter Johann and Katherina Klassen Penner. He was the second youngest son in a family of nine, not counting many step-siblings. Jacob was baptized in 1920. Jacob married Katharina Winter, daughter of Jacob and Margaretha Koop Winter, on 29 July 1928 at the Sheldon Farm near Hanley, Saskatchewan. They had two sons and one daughter. Jacob died 25 November 1983 in the Leamington Mennonite Home, Leamington, Ontario; Tina died there as well 16 December 2000.

Jacob P. Penner learned the German and Russian languages simultaneously: in his home and from his Russian playmates, respectively. Jacob's education began in the Musterschule (literally practice school) located next to the seminary where student teachers received their practical training, followed by five years at the Zentralschule (high school) and three years at the Teacher's Seminary. He taught one year in the Rosenthal elementary school, then one year in Neuschönwiese after which he was called to do alternative service.

In January 1924 Jacob P. Penner immigrated to Rosthern, Saskatchewan. He attended the English German Academy (EGA), in Rosthern, the public high school, and teacher's college in Saskatoon. Jacob got his first teaching position in 1927 at Langham School in Saskatchewan, followed by the Heidelberg School and the Hamburg School near Tiefengrund, Saskatchewan.

In 1943 the Tiefengrund Church asked Jacob P. Penner to become their minister and he was ordained 10 October 1943 by Elder Johannes Regier, of Tiefengrund, Saskatchewan. In 1944, Jacob received his diploma from the University of Saskatchewan after which he taught at the Rosthern Bible School from 1945 to 1947, then at the new Menno High School in Greendale, British Columbia in 1947-1948, and at the Mennonite Brethren Sharon Mennonite Collegiate Institute in Yarrow, BC in 1948-1949.

In fall 1949 Jacob P. Penner joined the teaching staff of the newly formed United Mennonite Educational Institute (UMEI) in Leamington, Ontario. Here, for twenty-one years, Jacob taught German, History and Religion and conducted the choir. He retired from this position in 1970. During these years Jacob took many courses at the University of Windsor and undertook numerous private research projects.

Katharina (Tina) Penner's role was largely that of a homemaker. She was also a sounding board for the problems and difficulties that came with Jacob's role as teacher.

In Leamington Jacob P. Penner shared the pulpit at the United Mennonite Church with the leading minister [[Driedger, Nicholas N. (1893-1988) and Driedger, Katharina Dick (1897-1973)|N. N. Driedger]] and many other ministers whose friendship he appreciated. He spoke at weddings and funerals, at the Leamington Mennonite Home evening services and for Sunday morning services on the local radio station.

Jacob P. Penner's sermons and lessons were of a serious nature. They contained no humor. However, if one was willing to "plough deeply" with him it was well worth the effort. This held true even in Jacob's later years at the Leamington Mennonite Home.