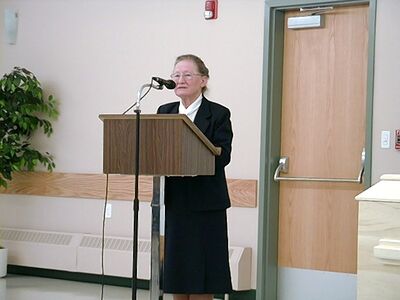 Esther Patkau was then ready, she said much later, for her first job. That job, in 1951, was to be a missionary to Japan serving under the Mission Board of the General Conference Mennonite Church. Since she could not be ordained as a minister, she was commissioned as a missionary. Ordination for women, came a dozen years later. For 23 years she served as a missionary learning a difficult language, and worked to establish the Oyodo Christian Church in Miyazaki, Kyushu. She was much loved. Upon her return to Canada in 1974 she was ordained and installed as a minister First Mennonite Church in Saskatoon where she served for seven years. Ever interested in learning, Esther obtained a master’s degree in theology in 1981 from Lutheran Theological Seminary in Saskatoon, majoring in pastoral care and counselling. From 1983 to 2005 she was a hospital chaplain in Saskatoon. Then from 2005 to 2017, she was the Spiritual Care Coordinator at Bethany Manor, a Mennonite Seniors Home in Saskatoon.

Interview with Esther Patkau in 2015.