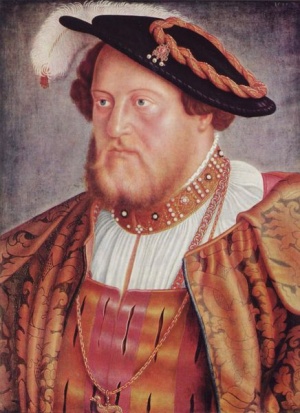 Otto Heinrich (Otto Henry or Ottheinrich): Elector Palatine of the Rhine (Kurfürst von der Pfalz), 1556-1559; born 10 April 1502, the son of Ruprecht of the Palatinate (1481-1504) and Elisabeth of Bavaria-Landshut (1478-1504). Otto Heinrich became Count Palatine of Palatinate-Neuburg at a young age and succeeded his uncle Friedrich II as elector in 1556. He had no children, and upon his death on 12 February 1559 he was succeeded by Friedrich III the Pious.

Otto Heinrich had introduced the Lutheran Reformation into his hereditary lands of Neuburg and Sulzbach by 1542. After the defeat of the Schmalkaldian League he had to leave the country; not until the treaty of Passau was signed in 1552 did he again acquire possession of it. By principle he was tolerant. Soon after assuming the government he turned his attention to the Anabaptists, issued a Kirchenordnung on 4 April 1556, ordered a church inspection, and held a disputation with the Anabaptists in Pfeddersheim near Worms in August 1557. But on 25 January 1558, he felt obliged to issue a mandate against them, obligating the superintendents to watch the parishes carefully. "If they should find among the clergy or the parishioners of their district offensive and injurious errors of the Zwinglians, Schwenckfelders, Osiandrists, Anabaptists, or other evil sects opposed to the Augsburg Confession, they shall deal with them in accord with the Brenz Bedenken."

Two years later, on 9 May 1558, Otto Heinrich released a second mandate that was to be obeyed in all points on penalty of severe punishment. It is directed against the Anabaptists in Neuburg. He, the prince, had seen "what rubbish the harmful error of Anabaptism bears not alone in the Christian community and church, but also in external police and government. Therefore, in order to counter it in good time, he had a constitution drawn up, which has been decided upon." And then the alleged errors of the Anabaptists are enumerated: "(1) Since the suffering and death of Jesus there is no original sin, and that all children thereafter are born without original sin. (2) infant baptism is wrong and useless. (3) They deny the third Person of the Trinity. (4) They hold that the knowledge of God is given to man without the study of the Bible and church attendance. (5) The sacraments are considered by them only as a mark and confession before men and as an outward sign of their brotherhood. (6) Some hold falsely that man is justified before God by holy works and through suffering and fulfilling the law and special illumination. (7) They assert that the reborn cannot fall into the wrath of God. (8) Some teach that temporal rule and temporal judges and the office of prince are sin and condemned and do not rule over Christian people, and judges or princes cannot be at the same time rulers and Christians. (9) They say that all Christians are obliged to give their money and goods to the Christian brotherhood. (10) Item, to accuse others before a temporal court is sin. (11) Item, to render an oath to the ruler or in court is sin. (12) Item, if a married man and woman separate on account of Anabaptism, this is right, together with other unchristian, coarse lies or errors, whereby they and Satan himself who impels them can be recognized."

Since all indoctrination had hitherto remained without result the elector ordered that all his subjects "who are spotted with the damned Anabaptist sect and other abominable errors, desist therefrom and return to the true evangelical Christian Church. Everyone shall also have his children baptized according to Christian order, in six or eight days at the longest after birth. Those who do not do so and regard infant baptism as useless, they shall be punished according to law without delay. Anabaptist elders or leaders should be sheltered by none, nor given any work. Nor is it permitted them to hold meetings or preach. He who trespasses against this mandate shall be brought into arrest by the official of the part of the country where the immigrant arrived, and immediately be announced to the government at Neuburg and be punished in accord with the imperial laws."

"But especially shall the officials of the Neuburg district be on a diligent lookout, whether Anabaptists by day or night assemble in the fields or woods and exercise supposed sacraments, as it has happened at other places that they have met secretly and in corners. They shall by deeds oppose such prohibited meetings and bring these insurrectionists and mobsters to prison, and report them to the government, to await the proper penalty."

"Whoever is then contaminated with the disease of Anabaptism and does not allow himself to be turned to the truth after being taught and warned, is to be held as a foul member of the body and shall not be tolerated in the church of God, but shall at least be expelled from the country. And if anyone shows himself so obstinate and ungodly, he might be punished by loss of life."

The church as well as temporal authorities were to see that this mandate was carried out. It was to be proclaimed about once every church year. In consequence of such severe mandates Anabaptism never reached any importance in the principality of Neuburg, though finally the Anabaptists were tolerated by Otto Heinrich.