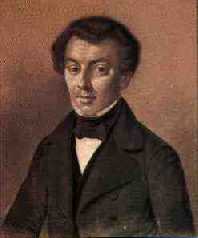 Johann Gerhard Oncken (1800-1884), the founder of the European Continental Baptist movement, had been influenced considerably by an American Baptist professor of theology, Barnabas Sears, who was attending a German theological school, and so developed the conviction of baptism by immersion as the correct form that should constitute a prerequisite for church membership. He and a group of sympathizers were baptized in the Elbe at Hamburg. He began his service with Pastor Rautenburg at Hamburg, where the first German Sunday school was started in 1825. These influences led Oncken to become the founder of the European Continental Baptist movement in 1834.

During his activities in Hamburg, Oncken became acquainted with Jacob Gysbert van der Smissen, a deacon in the Mennonite Church, who freely supported various Christian movements even beyond his own denominational boundaries. Oncken also visited some of the Mennonite churches in Poland in 1833, preaching among them six weeks and greatly enjoying their spirituality and their well-attended church services.

When the new movement of the Mennonite Brethren Church began in the Chortitza settlement of Russia, their leader, Abraham Unger, had already become acquainted with Oncken and solicited his visit and influence upon the new movement. Oncken accepted the invitation, and spent ten days visiting some of the newly established, but yet unorganized groups in 1869, and assisted in the ordination of Elder Abraham Unger as elder, and Aron Lepp as minister, and Cornelius Unger and Benjamin Nickel as deacons. Oncken continued his influence upon this group of the Mennonite Brethren Church by correspondence. His influence upon the moral standards of this group, however, was not quite as effective, for Oncken is known to have used tobacco, which several of his admirers in the newly established Mennonite Brethren Church continued to do. Aron Lepp opposed this to the extent that the church excommunicated all those who persisted in the use of tobacco, thus losing ten to twelve influential members. -- Jacob J. Toews

Johann Gerhard Oncken, born 26 January 1800 in Varel, Germany, died 2 January 1884 in Zürich. He came to personal faith in a Methodist congregation in London in 1820. Following this radical conversion experience he began missionary activity in North Germany in 1823 as a representative of the British Continental Society. After his baptism by immersion in 1834 he led in the founding of the first Baptist congregation in continental Europe. During his time in Hamburg Oncken maintained intensive contact with the Mennonite congregation there. His understanding of church order indicates Mennonite influence. The Baptist historian Hans Lukey has discovered that Oncken was in possession of a volume of select writings of Menno Simons, compiled by the Mennonite preacher Jan Decknatel, at least 10 years prior to his baptism. Other contacts with Mennonites before and after his baptism have also been documented. This may have influenced Oncken's choice of the name "Evangelical Baptism Minded" as the name for his congregation in 1837.

Changes in German Baptist congregational structure diminished these contacts eventually and led to Oncken's own loss of influence among Baptists. He eventually settled in Switzerland and died a lonely man. -- Johannes Reimer