From GAMEO
Revision as of 12:03, 19 March 2017 by SamSteiner (talk | contribs) (→‎Bibliography)
(diff) ← Older revision | Latest revision (diff) | Newer revision → (diff)
Jump to navigation Jump to search
A checked version of this page, approved on 19 March 2017, was based on this revision. 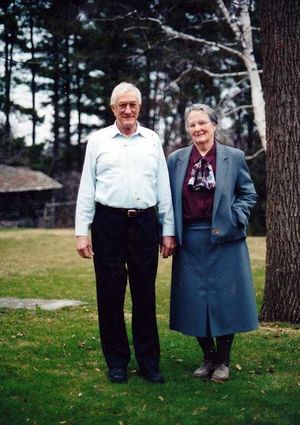 Following the evangelical influences of the time, in July 1940 at age 17, Joe Nighswander made the decision to give his heart and life to Christ. He was baptized in the conservative Markham-Waterloo Mennonite congregation (previously Old Order Mennonite) in Altona where he, his wife Elsie, and both sets of their parents had grown up.

His work with Parkview Homes brought Joe Nighswander from his home community of Altona to Stouffville, where he would remain for the rest of his life. Despite completing his elementary schooling in five years instead of eight, and against the advice of his teacher, his parents believed it best to end Joe's formal education. His administrative abilities would be honed on the farm and in the church.

A significant piece of his education was through his work as a conscientious objector. For three months in 1940, his parents released him from the farm to work under the auspices of the Non-Resistant Relief Organization, for E.D. Smith & Co. in Winona, Ontario. Later volunteering as a "cowboy sailor," in 1946 he assisted on a ship carrying 960 horses from Baltimore, Maryland to aid in reconstruction in post-war Europe. Travel to Cuba and to Germany and Switzerland also broadened his horizons. His experience as a conscientious objector strengthened his convictions that military might clashed with Jesus' teachings. The time in Cuba taught something of the third world reality and the time in Switzerland gave significant knowledge of his Anabaptist heritage.

In 1963, Joe Nighswander's life changed dramatically. He was appointed to a committee struck to investigate the potential of a cooperative venture by the Markham-area Mennonite churches that resulted in the purchasing of a Stouffville nursing home. By 1970, he had responded to God's call for Christian service by accepting the invitation of the board of Parkview Homes to serve as Administrator. A course on "Administration of Homes for the Aged" at McMaster University in Hamilton, Ontario provided Joe with the preparation for a task that would engage him for the next two decades. This course of study proved to be an "important milestone," aiding him to "change ... from a farmer to a business man, responsible” ultimately “for the care of 109 Residents and the supervision of approximately 60 staff persons."

From his youth, his family participated fully in church activities which included Sunday visiting, “singings” for young folks, bi-annual communion services, barn raisings, and work bees necessary to maintain the Reesor, Almira and Altona church buildings used by the Markham-Waterloo group, and later administrative boards and committees at Steeles Ave. Mennonite and Rouge Valley Mennonite. Conference work included roles on the Mennonite Mission Board of Ontario, executive (including moderator) of the Mennonite Conference of Ontario and Québec, as well as Mennonite Central Committee. Community and administrative roles were extensive with contributions to local boards, church boards and committees, Parkview Services to Seniors and a variety of committees and associations largely related to services for seniors.

Joe and Elsie Nighswander served the church extensively and well, but they also experienced deep tragedy. On 13 September 1973 their son David died suddenly and unexpectedly. Late in life, Joe lamented: "Does one ever recover from such a blow? I doubt it." Despite this deep tragedy, Joe reflected positively at the end of his life on the "many opportunities" that "came along following my unconditional promise to God to be available for whatever He wanted me to do. I have not needed to apply for any job at any time, but requests came to me to serve from a wide variety of agencies and people. Opportunities to serve continue to this day, even though I am already 78! Volunteerism can be satisfying and, hopefully, helpful!"