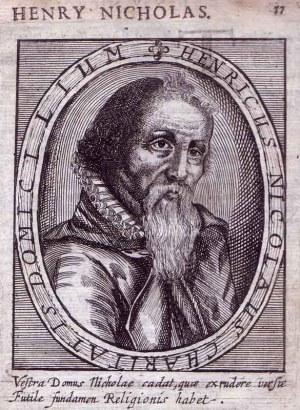 Engraving from Apocalypsis, or The revelation of certain notorious advancers of heresie. London, 1655.
Scan provided by the Mennonite Archives of Ontario.

Hendrik (Heinrich) Niclaes was the founder of the Familists or the "House of Love," also called Nicolaites. He was a native of Münster, Westphalia, Germany. He had visions as a boy, entered a Latin school at the age of nine, but three years later worked in his father's business until he married and took over a business of his own. At the age of 27 he was arrested on a suspicion of Lutheran beliefs, and then moved to Amsterdam. Here he was arrested on a suspicion of being a "Münsterite." After his release he stayed nine years longer in Amsterdam. At the age of 39, while he was living in Emden, East Friesland, where he owned a thriving business, he had prophetic visions and gathered a following. When he was 59 he was again imprisoned and tried on the rack. He escaped to Kampen, Dutch province of Overijssel, and from there to London and Cologne. He was a prolific writer. Nippold names 51 titles from his pen, which deal with a mystical pantheism.The disloyalty of some friends embittered the last years of his life. With David Joris he carried on a brief literary dispute. Other Anabaptist connections cannot be claimed, as some older histories erroneously assert. In Holland he had few adherents. Only in Dordrecht was there a group of followers until about 1614. Among his most influential followers was Christoffel Plantijn (1520-1589), noted printer at Antwerp.