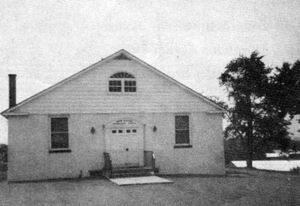 Bishop Homer Bomberger was one of the founding bishops of the Eastern Pennsylvania Mennonite Church (EPMC) in 1968. He requested retirement status as bishop of the White Oak district in December 1971. Sixteen families from the White Oak district began holding prayer meetings in the home of Jacob Hostetter in the fall of 1971. They formed a new congregation with Homer as their bishop and held their first Sunday morning service in the home of Noah Martin on 26 March 1972. On 23 April 1972 they held their first service in a newly-purchased building near Lititz, Pennsylvania, which they named New Haven Mennonite Church. The property was purchased from God’s Fellowship Church with settlement being made on 16 June 1972. Dedication and Bible fellowship meetings were held at New Haven on 8-9 July 1972, with Homer Bomberger and Samuel Miller as moderators and Ernest Bontrager as speaker.

Homer served as bishop until 1983 when George Reed was ordained to assist him. Homer spent his last four years in a retirement home where he died on 30 January 1995. Samuel Miller served as the first minister at New Haven and was also the first of the new group to be laid to rest. He suffered a stroke on 18 April 1973, and died a short time later. Elmer Snavely, who was ordained at the Miners Village Mennonite Church (Lancaster Conference), became part of the new group and served as deacon until his death on 20 April 1977. Robert K. Miller, originally ordained as minister in 1940 at Kralls Mennonite Church (Lancaster Conference), became a member at New Haven and served as minister from 1974 to 1980. Harold Brenneman joined New Haven as an ordained minister and served without charge from 1974 until April 1997 when he transferred to the EPMC.

New Haven held its first ordination on 13 September 1975. Richard Boll was ordained as deacon to assist Elmer Snavely whose health was failing. Richard served in that position until November 1992 when he moved to Philadelphia to serve at 6th Street Mission (MAMF). In 1982, Elmer Bauman came to New Haven as an ordained deacon from Herr Street Mennonite Church in Harrisburg, Pennsylvania. He served as deacon without charge until November 1985 when was given charge as deacon for a new MAMF congregation being established at Refton. Linford Weaver was ordained as deacon on 28 November 1991, to replace Richard Boll. Linford served until he moved on to help establish the Pleasant View (MAMF) congregation in November 1999. Amos Hurst was ordained 28 November 1999 to fill the vacancy.

On 1 March 1981 the church held its second ordination, this time for a minister to replace Robert Miller. Melvin Musser was ordained and served on the ministerial team until he resigned in April 1982 and moved out of the area. Merle Stoltzfus was ordained as minister on 4 February 1982, and served until April 1992.

Needing a larger church building in the Lancaster West District, in 2004 New Haven purchased land from Paul Martin across the road from the New Haven Mennonite School. A new building was constructed and completed in 2005 with the first service held on September 25. A dedication service was held 5 November 2005, with Arthur Good as speaker and Luke Martin having the dedication. During the building process a buyer was sought for the old building (the first MAMF church) and it was sold privately in 2005 to New Covenant Mennonite Church.