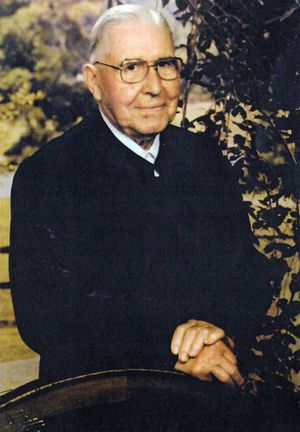 Homer D. Bomberger: farmer, minister and bishop, was born 18 November 1909 to Cyrus Bomberger (27 December 1886-28 April 1987) and Lydia (Douple) Bomberger. He was the oldest of their seven children and grew up near Halfville, a tiny village north of Lititz, Pennsylvania, USA. He obtained an eighth grade education in the Fairview Elementary School and also attended Eastern Mennonite College for a Short Term.

During the 1960s, the Lancaster Conference was obviously changing. The breaking point came in 1968 when the Conference adopted a new discipline, changing its stance on a number of issues. With a "heavy heart," Homer wrote a letter of resignation from the Conference. He was one of five bishops who withdrew from Lancaster Conference and founded the Eastern Pennsylvania Mennonite Church (EPMC). Homer lost most of his district to his younger fellow-bishop, Howard Witmer, who stayed with the Conference. But other congregations soon were under Homer's supervision, forming what became known as the White Oak District of the EPMC. The district eventually included Bethel, Conestoga Drive, Hopewell (Maryland), Miners Village, Simmontown, and White Oak.

Before long it became evident that Homer and the other four EPMC bishops disagreed on several issues. He was not in favor of the additional rules being promoted by EPMC and did not agree to remove the organ from his home. He also thought lay members should have a larger voice in the vote on proposed new rules than was being allowed. The other bishops considered him too lax and appointed two bishops to oversee him. This caused a great deal of unrest in the White Oak district. In December 1971 Homer requested retirement status with EPMC.

In 1972, some of Homer's supporters bought a building at Lexington and organized the New Haven Mennonite Church. He accepted their request to serve as their bishop. Two other congregations soon formed and also requested his leadership. Homer did not want the churches he served to be known as "the Bomberger Mennonites" and asked them to a adopt a formal name. In 1978 they were officially organized as the Mid-Atlantic Mennonite Fellowship (MAMF). Homer continued to serve as a MAMF bishop until 1983 and afterward as he was able.

Homer's wife, Naomi, died on 8 January 1990. After a few months, Homer moved to the Pleasant View Rest Home where he spent the last four years of his life. He died on 26 January 1995 at the age of 85, and was buried beside his wife in the cemetery of the Erb Mennonite Church where he first served as minister.