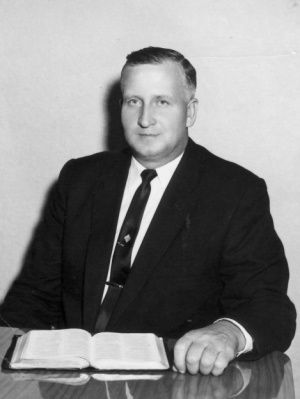 In 1925 the Neufeldt family was given permission to leave the Soviet Union. Since Peter Jacob had been diagnosed with glaucoma, the family was forced to settle in Vera Cruz, Mexico. However, a year later, the Neufeldts received permission to immigrate to Canada, first settling in Zenata, Saskatchewan. In February 1929 when Peter was an eighteen year-old teenager, his family moved to Yarrow, British Columbia. The perpetual struggle to survive during this time meant that Peter worked long days in logging camps and the local hop yards.

Peter and his wife Helen were able to establish a farm in Yarrow, although he never enjoyed farming. Construction was more to his preference. To capitalize on the post-war construction boom, Peter together with his brothers-in-law John and Henry Enns started a construction company. The enterprise developed into a successful company, building houses and apartments throughout the Fraser Valley.

Peter’s ministry was defined by three overarching causes that he enthusiastically and generously applied himself to. The West Coast Children’s Mission (WCCM) had been organized in 1938 as a Mennonite Brethren evangelistic witness. Over several decades, outpost mission stations were established in some 50 British Columbia communities. The success of this work was such that by 1960, the WCCM had become the official home missions arm for British Columbia Mennonite Brethren. Neufeldt became a vigorous WCCM supporter, generously contributing his own time, personal financial resources, construction expertise, as well as transportation assistance for field workers.

If Peter Neufeldt was concerned for the evangelisation of British Columbians throughout the province, he also felt a deep burden for the youth of his own community. With the collapse of the Sharon Mennonite Collegiate Institute in 1949 (the first Sharon), Yarrow Mennonites moved quickly to establish a second private high school, Sharon Mennonite Collegiate (SMC). Accordingly, the church elected a steering committee with Peter Neufeldt as secretary, and his brother Henry chair. By 1956 Peter succeeded his brother as chair of the board, continuing in this position until his election as senior pastor of the Yarrow MB Church in 1960. Moreover, in 1955 the Peter Neufeldts had a corner of their dairy farm rezoned, donating a choice three-acre building site as the new home of SMC.

Foremost, however, Peter Neufeldt was a dedicated churchman. Following his baptism and acceptance into membership of the Yarrow Mennonite Brethren church in 1930, he became active in congregational ministries. For many years he taught Sunday school and served on the Sunday School Committee. With growing trust, the Church took note of Neufeldt’s character and gifts. On 7 May 1953 he was ordained to the ministry, but not before he apologized to the church for having at one time been a members of a labor union. Increasingly, as he was drawn into the life and leadership of the church, he was included in Sunday morning preaching schedules.

In 1959 Herman Lenzmann resigned as senior pastor of the church. As was evident to all, the still sizeable congregation of just over 600 members could not continue for long without pastoral oversight. On 12 February 1960 an anxious congregation assembled to consider its leadership deficit. Since the Search Committee had been unsuccessful in finding a viable candidate, Neufeldt reluctantly agreed to accept this responsibility with an intuition that his tenure would be short. A year later while traveling to the Canadian Mennonite Brethren Conference convention in Alberta, Peter Neufeldt along with his two traveling companions were killed in a motor vehicle accident in Bonners Ferry, Idaho. The date was 26 June 1961. A family was left mourning the loss of their beloved father, and a congregation shaken by the death of such dedicated servants of God.

Giesbrecht, David. "The Life and Contributions of Peter P. Neufeldt." In Windows to a Village: Life Studies of Yarrow Pioneers. Kitchener, ON: Pandora Press, 2007.

Minutes of the Sharon Mennonite Collegiate Board. Archives of the Mennonite Historical Society of British Columbia, Abbotsford, BC: File Box 990.11.

Minutes of the West Coast Children’s Mission. Archives of the Mennonite Historical Society of British Columbia, Abbotsford, BC: File Box 992.1.

Minutes of the Yarrow Mennonite Brethren Church. Archives of the Mennonite Historical Society of British Columbia, Abbotsford, BC: File Box 992.12.1.