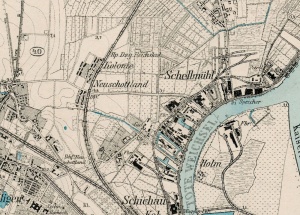 By the late 14th century, strong trade links had been established between the Danzig region and Scotland. The immigration of Scottish settlers to the Polish-Lithuanian Commonwealth began at that time and increased beginning in the last decades of the 16th century and continuing until the late 18th century. Neu Schottland (New Scotland), along with Alt Schottland, were two villages originally founded by Scottish settlers and later settled by Mennonites.

Until 1772 the village was located in what was known as Royal Prussia (also known as Polish Prussia) in the Kingdom of Poland. The First Partition of Poland in 1772 resulted in the creation of a new province on 31 January 1773, called West Prussia, in which the village was located. The village was situated in the district (Kreis) of Stadtkreis Danzig until the establishment of the Free City of Danzig in 1920. The village came under the control of Nazi Germany during World War II until February 1945, when it was occupied by Soviet forces and returned to Poland.