From GAMEO
This is the stable version, checked on 11 April 2020. 1 pending change awaits review.
Jump to navigation Jump to search 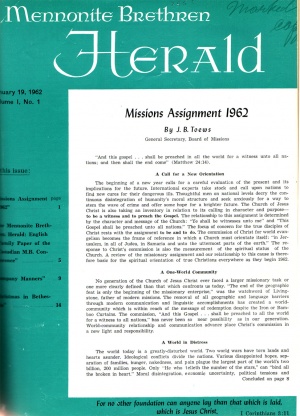 The first issue of the MB Herald

In the years following World War II, Canadian Mennonite Brethren had a growing concern about the spiritual wellbeing of their youth. German was still of primary use in their churches, but it was clear that young people were becoming more and more anglicized; many leaders believed that German would be a rarity in a matter of decades. While some worked to preserve the use of German—like those who formed the Committee for the Preservation of German Language in 1950—others believed that the way to keep younger generations connected to the church was to communicate the gospel to them in English.

Henry F. Klassen, general manager of Christian Press (Winnipeg, Manitoba, Canada), was among the first to take hold of this vision. With the support of leaders like Abraham H. Unruh, John G. Baerg, and Frank C. Peters, and limited financial support from the Canadian Mennonite Brethren Conference, Klassen began publishing a variety of papers with English content, including the Konferenz-Jugendblatt (1946-1957), The Youth Worker (1952-1978), and Mennonite Observer (1955-1961). Interest in the new English papers was evident, and with time Mennonite Brethren leaders became convinced that an English language paper was essential for the transmission of their Christian heritage to future generations.

The question, then, was how to proceed. Cost and editorial control were primary concerns. One option was to work in conjunction with the Mennonite Brethren General Conference paper, The Christian Leader (1937-    ). The idea here was to distribute one paper in both the Canadian and U.S. districts, with each district contributing funds, content, and its own editor. While the option appeared cost effective and was advocated by the General Conference Board of Publications, the Canadian Mennonite Brethren had other ideas. If they were going to commit significant funds to an English paper, control of the paper's content was imperative. A fully Canadian owned and edited paper would ensure that coverage of Canadian activities, interests, and viewpoints would be adequate.

By 1961 plans were well on their way: Christian Press had been purchased by the Canadian Conference to help keep production costs low, the Konferenz-Jugendblatt and the Mennonite Observer had been discontinued to avoid unnecessary duplication, and a young Rudy Wiebe had been hired to edit what was now named the Mennonite Brethren Herald.

Shortly after, the Herald began as a 16-20 page weekly paper distributed to all Mennonite Brethren homes free of charge. As stated in its first issue, the goals of the paper were to stimulate spiritual growth and to provide news items that featured the work and interests of the Mennonite Brethren in Canada. Over the years, news of baptisms, missionary endeavors, Mennonite Central Committee work, anniversaries, and deaths frequented the Herald's pages, as did thoughtful columns on a variety of theological and social issues—the enduring column "Personal Opinion," by John Redekop (1964-); the column "A Christian Mind," by writers such as Walter Unger, James Pankratz, and Elmer Thiessen; and feature articles by Frank C. Peters, Harold Jantz, Katie Funk Wiebe, and David Ewert stand out as among the most memorable.

Rudy Wiebe's editorial work also occupies a noteworthy place in the history of the Herald. From early on, several Mennonite Brethren leaders did not appreciate the issues considered or the critical tone in Wiebe's editorials; his controversial book, Peace Shall Destroy Many (1962), only aggravated matters. In April 1963, Wiebe was forced to resign. No official explanation was published, although Wiebe's farewell (MBH 21 June 1963) spoke volumes. In it he wrote: "There are in our brotherhood those who do not believe that frankness and openness is the way things should, or even can, be fruitfully discussed." Wiebe's disappointment was evident. 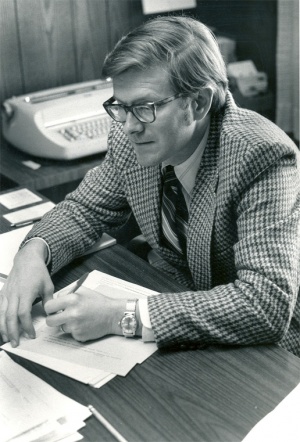 Eventually, however, the frankness and openness that Wiebe spoke of became more commonplace in the Herald. Longtime editor Harold Jantz (1964-1984) led the way. Jantz displayed a remarkable ability to bring people and ideas together. His editorial work displayed the courage and sensitivity to discuss everything from politics to homosexuality, and the creativity and ingenuity to blend inner spirituality with social action, Evangelicalism with Anabaptism. After 21 years of service, Jantz left this work to a variety of other editors, including Herb Kopp (1985-1988), Ron Geddert (1989-1994), Jim Coggins (1995-2003), Susan Brandt (2003-2005), Laura Kalmar (2005-2015), and Karla Braun (2016-2019), but the Herald's attempt to find unity amidst diversity continued.

Over the years the format of the Mennonite Brethren Herald changed somewhat, lengthening to around 30 pages, dropping to bi-weekly in 1969, tri-weekly in 2002, monthly in 2008, bi-monthly in 2016, and quarterly in 2018. In 1993, Geddert's and Coggins's editorial involvements also brought a slight shift in direction. Intended as an "evangelistic tool," these editors published a biannual special edition of the Herald called Encounter, starting in 1993. While mailed under the traditional Mennonite Brethren Herald cover, recipients were encouraged to distribute the glossy publication underneath to their non-Christian peers. The Encournter publication continued until the end of 2002. The Herald was one of the first Mennonite periodicals to publish an Internet edition, with the first issue appearing in February 1996. Full colour was introduced in 2008.

Throughout its changes and challenges, the Herald remained as relevant and dynamic as the tradition it professed. It continued to be an important stimulus for spiritual growth, a vital connection between diverse people and churches, a place for vibrant debate and new discovery, and an indispensable source for Mennonite Brethren history. However, over the next decade the denominational magazine faced the same pressures experienced by most other church newspapers.

Yearbooks of the Canadian Conference of Mennonite Brethren Churches.