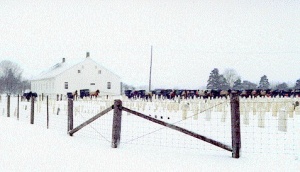 R.R. 1, Waterloo, ON, N2J 4G8. Located on the south east corner of King St. N. and Country Squire Road on the northern edge of Waterloo. Minister Reubin G. Martin served in the 1980s as a non-salaried congregational leader. In 1925 there were 160 members; in 1975, 186. The congregation ceased worship at Martin's Meetinghouse in December 1993. It had been affiliated with the Mennonite Conference of Ontario (1824-1889) and the Old Order Mennonite Church (1889-1993). The language of worship was German.

This meetinghouse, built in 1848, was long the center of the large Mennonite settlement in Woolwich Township, north of Waterloo Township. It was named "Martin's" probably because the site of four acres was on the farm of pioneer Peter Martin and had been reserved by Henry Martin in 1824 for the purpose of a meetinghouse and burial grounds, even though the land was not actually purchased (by the "Mennonite Society of British North America" according to the deed) until 1848, when the meetinghouse was erected. The meetinghouse was long the only one north of Waterloo and served all the Mennonites in Woolwich Township.

In 1889 the Old Order schism created a serious break in the Ontario Mennonite body. The bishop at Martin's at that time, Abraham Martin, led most of his congregation in his refusal to accept the newer methods of church work (Sunday school, etc.) which had been accepted by most of the Ontario Mennonite congregations, and made Martin's the strongest unit in the Ontario Old Order group (which included smaller groups at Selkirk-Rainham and Markham).

In 1925 a schism in the entire Ontario Old Order group resulted in an almost half-and-half division at Martin's. The new progressive group, which permitted automobiles and telephones, joined with a similar group at Markham to form the Markham-Waterloo Conference. The meetinghouse is an excellent example of the older style of architecture and anterior arrangement and furniture. In 1900 it was enlarged to 42 x 64 ft.

The Martin's congregation subsequently met at the Conestoga meetinghouse west of St. Jacobs from 1994 until 2011 when the new Martindale Mennonite meetinghouse was constructed.