The Conestoga congregation is one of the oldest in the Waterloo region. In 1844, 0.5 hectares (1.3 acres) of land was purchased for 5 shillings and the Mennonite community erected a log building for use as a school and a meetinghouse. A frame church building was constructed in 1853, after the log building was destroyed by fire.

Ludwig Koch was ordained in 1845 as Conestoga's first minister, and John W. Brubacher was ordained in 1847 as the first deacon. As was the practice in Mennonite churches of the time, they were ordained by lot from within the congregation and were not paid for their church service.

The division within the Ontario Mennonite Conference in the 1880s affected the Conestoga congregation. For a time the Conestoga congregation shared the meetinghouse with dissident minority group. However, around 1892 a conflict arose between the two, with the dissident Mennonites claiming the building as their own. It is said that "one day a man asked the caretaker for the keys, saying he left in the rubbers in the church. He kept the keys." 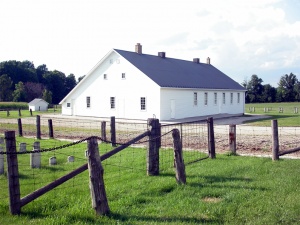 The Conestoga congregation provides signing for the deaf when a deaf or hard of hearing person regularly attends, and has been doing so since around 1999.

In 2004, the Conestoga congregation consisted of around 60 families. No accurate count of members is available for most of the history of the congregation because Old Order Mennonites think of themselves as members of the church at large and not just the immediate congregation. The Old Order also do not see the quantity of members as indicative of the congregation's importance. When people move from one geographical area to another, they automatically “belong to” the congregation whose meetinghouse is closest to their home. No membership transfer takes place from the former location.

1Ezra L. Martin was ordained to the office of Bishop in 1914.

2Levi P. Martin was ordained at Wallace and then moved to Conestoga.

Conestogo Old Order Mennonite Church, near St. Jacobs, Ontario, was built in 1893 about four years after a schism separating the from from the Mennonite (MC) congregation. For some time after the schism, the question of which faction should hold the building remained unsettled. The Old Order Mennonites worshipped in the building known as the Conestogo church up to the end of 1892, while the Mennonites worshipped in a home about three miles distant near Conestogo. When the Old Order produced a church calendar entitled "Old Mennonite," the position was taken that they had changed their name, hence had no right to the Conestogo Mennonite church. Accordingly the Mennonites took possession of the building on 1 January 1893.

The Old Order Mennonites then put up a new building about one mile south of their former place of worship, where the have held services up to the present time (1950). The minister was Daniel M. Brubacher (1840-1921), who was ordained in 1876. The minister in 1950 was Irvin Shantz. The membership worshipping here is counted as part of the Martins district, which has over 1,000 members. -- Abraham Good.