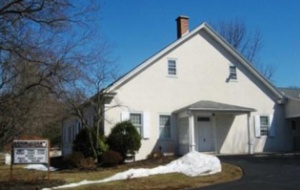 The Lower Skippack Mennonite Church was an independent congregation in Skippack Township, Montgomery County, Pennsylvania. The Mennonite settlement in this township was made in 1702, and the first house of worship for what was called the Skippack congregation was erected about 1725. A new meetinghouse was built in 1844. Three years later the Oberholtzer division occurred in the Franconia Conference to which the congregation then belonged, and the portion of the Skippack congregation which seceded from the conference to join the Oberholtzer group took possession of the new meetinghouse. The portion of the congregation which remained in the Franconia Conference finally in 1848 built what came to be called the Upper Skippack meetinghouse, and as a consequence the meetinghouse of 1844 came to be called Lower Skippack. By 1851 there was disharmony in the Lower Skippack congregation which a committee of the new (Oberholtzer) conference failed to resolve. Three ordained men of the congregation withdrew from both congregation and conference, namely, Bishop Abraham Hunsicker, and preachers Henry A. Hunsicker and Abraham H. Grater. Trouble and dissension continued, partly because Preacher Henry G. Johnson, who had been ordained in 1847, insisted strongly on a literal observance of feetwashing (John 13:1-17). In 1861 the Oberholtzer Conference expelled Johnson, who retained the support of most of his congregation. The small remnant of the congregation that stayed with the conference under the leadership of Preacher David Bergey died out by 1886. Johnson's son, Henry H. Johnson, was ordained in 1878 as a preacher in the now independent Lower Skippack Church, and the latter's son, Henry M. Johnson, was ordained preacher in 1915. Because of three generations of Johnson preachers the group has often been called Johnson Mennonites. Amos K. Bean was ordained preacher in 1873 and bishop two years later. In 1956 the congregation still observed feetwashing, and was a bit more conservative in discipline than are the General Conference Mennonite congregations of eastern Pennsylvania, although less strict than the churches of the Franconia Conference. The membership of Lower Skippack stood at about 300 in the mid-20th century. In 1954 Henry M. Johnson was serving as bishop, and Frank Croll as minister.

In 2010 the congregation affiliated with the Alliance of Mennonite Evangelical Congregations.