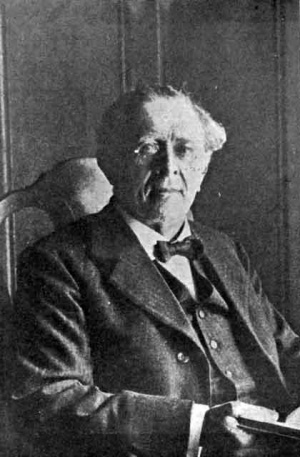 Vincent Loosjes, a son of Adriaan Loosjes and Margaretha van Geuns who was born 24 November 1855 at Amsterdam and died 19 September 1932 at Amersfoort, was a preacher and author like his father. After the completion of his study at the University of Groningen and the Amsterdam Mennonite Seminary he served as pastor of the Mennonite congregation of St. Hippolytushoef en Stroe on Wieringen 1879-1881, Blokzijl 1881-1886, Beemster 1886-1890, Sneek 1890-1912, and in his last years, 1912-1921, the large Amsterdam church. On 3 April 1921 he resigned from the ministry and enjoyed 11 years of rest. He always showed an earnest and sincere piety, also in his sermons, of which he demanded high aesthetic quality. Theologically he was certainly not modernistic, nor was he strictly orthodox. He wished "to hold himself only to the Bible as the authoritative document; the revelation of the sacred love of God to man made perfect in the Gospel and in the life of Jesus demands the love of men in exchange." Vincent Loosjes wrote a great deal; of his five novels, Rinske Sonnema, published in 1896 (a third edition in 1923), is probably the best known. In addition he wrote a number of poems, some of which have been published in collections of folk songs. He was fond of making aphorisms, many of which have been collected in two booklets, Bitter en Zoet (1909) and Prikkels en Pluimen (1919). In his literary works, which rarely surpass mediocrity, we are struck by his keen observation of people and his disturbingly blunt expressions, which also characterized his sermons. His sharp, ruthless honesty repelled some listeners. Nevertheless he was a faithful shepherd and a good friend to many. In addition to his imaginative works he also published a study on Louis Bonaparte, King of Holland (1888). In addition he published a sermon, Des Tempels vergankelijke luister (Sneek, 1892), and Enkele opmerkingen over de zelfstandigheid onzer gemeenten (Haarlem, 1902).

In his Sneek period he took part in social life, but his actual métier was his study. In 1879, shortly before he took on his first preaching position, he married Wilhelmina Willers, who died before he moved to Amsterdam.