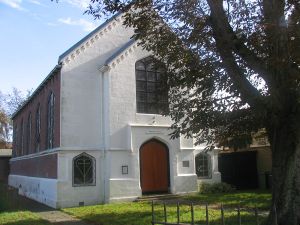 Hippolytushoef (Sint), on the former island of Wieringen, Dutch province of North Holland, is the seat of a Mennonite congregation, formerly called "Hippolytushoef and Stroe," now usually called the Wieringen congregation. The date of its founding is not known. Leenaert Bouwens' baptismal lists indicate that it must have existed between 1551 and 1578. He baptized 25 persons here in 1563-1565, and 10 in 1568-1582. Additional information on the early congregational history is found in the membership lists of 1731-1819 and from 1869 to the present (Wiersma in Doopsgezinde Bijdragen 1891) and the old record book that was begun in 1721. In the 17th century the congregation belonged to the Flemish branch; it sent a representative to the conference at Haarlem, but in the 18th century it was usually called Frisian. In 1724 trouble arose when one of the members was appointed sheriff, thus accepting government office. Silent prayer was in use until 1728. Not until 1852 were the benches in the meetinghouse replaced by chairs for the women.

In the earlier time the care of the poor was already well developed; even non-Dutch Mennonites were not forgotten. The foreword of the record book lists rather considerable sums contributed to the Lithuanian, Prussian, and Danzig brethren. The earliest minister's name of the Wieringen congregation on record is Albert Pieter Keizer, who was installed in 1690. Other early preachers were Elbert Wognum, who served as preacher 1726-1742 and as elder 1742 until his death in 1781, and Cornelis Wagenmaker, preacher 1740-1743, elder 1743 until his death 1784. Elder Wognum was at the same time burgomaster. When in the government meeting an oath had to be taken or a sentence had to be pronounced or military questions were to be discussed, he left the room for a while.

The following activities were found in this congregation in 1954: three women's circles, Bible circle, church choir, library for the youth, and youth group.

After 1930 Wieringen was no longer an island because of the Afsluitdijk, a 20-mile dike extending from Friesland to North Holland (built 1927-1933), which has converted the former Zuiderzee into a lake (IJsselmeer), and is connected by the dike with both North Holland and Friesland.

No figures are available before 1815.