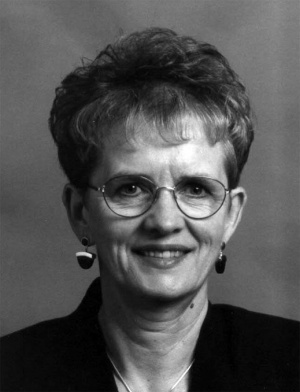 Eleanor's first 10 years were spent in Calgary, where her family attended the Central United Church. In 1947 the family, moved to Abbotsford, BC, where she was baptized on 25 May 1955 at West Abbotsford Mennonite Church. Her high school education at the Mennonite Educational Institute (MEI), combined with the influence of her church were, for her, significant in shaping faith and setting a direction for her life's journey. For Eleanor, education and service were the trademarks of a strong Christian faith within the Mennonite tradition.

Eleanor received her teacher certification in 1958 from the University of British Columbia and taught one year in Kamloops, BC and one year at the MEI in Abbotsford. She received a Diploma in Sacred Music from Canadian Mennonite Bible College in Winnipeg in 1963; a B.A. from Goshen College in 1967; and a M.S. Ed. (College Student Personnel Administration) from Indiana University in 1971. Summers were spent volunteering at Camp Friedenswald, Michigan.

In 1970 Loewen accepted a two-year assignment at the American School of Kinshasa as a High School Counselor. Upon her return, she accepted a position at Bluffton College in Ohio as Assistant Dean of Students, Foreign Student Advisor and Head Resident.

From 1976 to 1979, Eleanor was employed part-time by Bethel College, Kansas, and by the General Conference Mennonite Church Department of Higher Education. She worked with student groups on college and university campuses in the United States and Canada, as well as conducting workshops in adult life stage development. In 1981, she received her doctorate from Indiana University with a major in Higher Education Administration.

In 1981 Loewen returned to Winnipeg where she experienced a wide range of career challenges: education consultant for the Congregational Resources Board of the Conference of Mennonites in Canada; interim-executive secretary for the Congregational Resources Board; consultant for the Ministry Development Center (1986-92); teaching at the University of Winnipeg, the Union Biblical Seminary in Pune, India, and the Canadian Nazarene College in Winnipeg; and teacher and leadership trainer for persons working in congregational settings.

In 1990, Eleanor accepted a position as a staff associate with Knox United Church and as a member of the interim ministry team at Windsor Park United Church. These positions included a wide variety of responsibilities from leadership training to leading worship, preaching, and planning and leading adult education programs. During this time period, she also served as an adjunct professor with the Winnipeg M.Div. Consortium, teaching Christian Education.

In addition to teaching, Eleanor was actively engaged in writing numerous articles on education and congregational concerns in Mennonite periodicals. She was a regular contributor to Herald Press, Mennonite Publishing House, Mennonite Mirror, and Faith and Life Press with respect to adult Christian education. In 1995, she co-authored, with John Toews, No Longer Alone: Mental Health and the Church.

For Eleanor Loewen, being Christian and Mennonite were synonymous. She believed strongly that education and scholarship must happen within the faith community. In an article published in Why I Am A Mennonite, she wrote, "The greatest influences in determining why I am a Mennonite were the strong emphases in home, church and school, on education and service." For Eleanor, having Mennonite parents and closely-knit extended families that shared their stories was important in forming who she was as a Mennonite. Eleanor Loewen lived her life's motto: "Faith, Family, Friends".