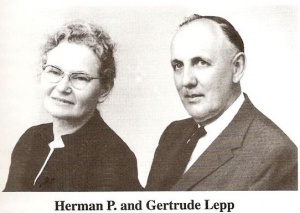 Herman Peter Lepp: pastor, elder, naturalist and farmer; born 2 February 1903 in Beristowoja, Bachmutter Kreis, Ukraine to Peter P. and Bertha "Laise" Lepp. He was the youngest of five children. On 18 April 1926 he married Gertrude Unger (1904-1989) in New York, Chortitza and later that year moved to Waterloo, Ontario to live with Gertrude's parents. Unable to find employment in Waterloo, Elder Jacob Janzen encouraged Herman to move to Reesor, Ontario and assist in serving an establishing Mennonite community as pastor. Herman arrived in Reesor on 8 December 1926 and was ordained by Jacob Janzen on 18 June 1927. His wife remained in Waterloo until the birth of the first of six children, four boys and two girls. Feeding the family in a small 16 x 7 foot cabin in the northern environment was a serious and ongoing concern.

Herman, without any theological training, served two churches in the Reesor area, having to walk or ski the 11 km. distance between the churches. To aid him in his travels, he invented a one-runner sleigh with a transverse push-bar. It ran in the ski track and could carry a 45 kg. weight of flour, sugar, etc. His hobbies in the north included woodcarving and oil painting, both depicting the reality of nature. He also wrote poems about life in Reesor, some of which were published in Der Bote. His ardent and artistic nature was often reflected in the spirited, challenging and uplifting delivery of his sermons.

The Lepp family left Reesor in 1943 and eventually settled on a farm in Harrow, Ontario. Herman continued his pastoral duties in the Leamington United Mennonite Church until he became minister of the newly formed Harrow Mennonite Church in January 1953. On 21 August 1953 Elder J. J. Thiessen from Saskatoon ordained Herman as elder. Herman also served the people on Pelee Island and continued to return to Reesor many times.

Bleeding ulcers forced him back into the hospital many times and after being unable to recover from surgery, he died on 25 January 1966, thus ending 39 years of faithful service. Gertrude continued life as a widow for 23 years before she was called home on 21 July 1989. Both Herman and Gertrude are buried in Evergreen Memorial Park Cemetery, Leamington.