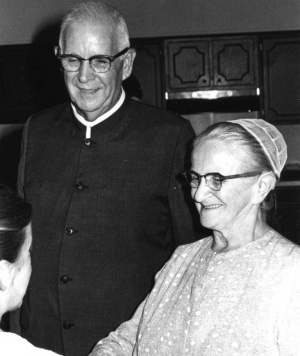 John Edwin Lapp, Mennonite Church pastor, bishop, and church leader, was born 11 September 1905 in Lansdale, PA the son of Isaiah L. and Kate Krupp Clemmer Lapp. In 1920, he joined the Plains Mennonite congregation, where on 22 June 1933 he was ordained by lot to the ministry. Previously he had worked at many types of work after his graduation from high school in 1923, and had finally settled on the ownership of a small family-run grocery store and delicatessen in Lansdale. On 15 September 1926 he married Edith Nyce, daughter of Allen and Emma Nyce. Their children are: John A., Mary Lapp Swartley, James, Daniel, Samuel, Joseph, Sarah Lapp Kolb, Ruth Lapp Guengerich, and Rhoda Lapp Greenlee. Edith died on 27 May 1984.

In the wider church John wrote articles for numerous Mennonite publications beginning in the late 1930s. In 1941 he was elected to the Peace Problems Committee of the Mennonite Church (MC) general conference (later Committee of Peace and Social Concerns; chairman, 1962-1971. He was also a member of Mennonite Central Committee (MCC) Peace Section, and the consultative council of the National Service Board for Religious Objectors (1940- ). On two occasions in 1967 he presented testimony before the House Armed Services Committee in response to a new bill that would have inducted conscientious objectors into the armed services before their applications for alternate service could be considered. A strong advocate of conscientious objection to military service, John and other members of the Committee on Peace and Social Concerns in 1969 supported denominational recognition of non-registrants.

In retirement John took up the folk art of Fraktur and made nearly 500 decorative pieces. He died 1 September 1988.