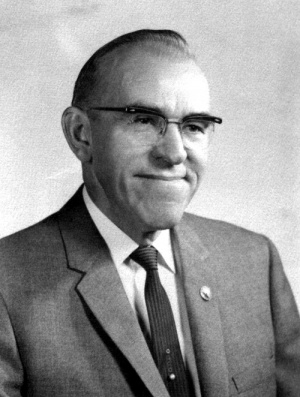 Abram had a varied life with extensive involvement in various areas. He was active in education at the elementary and Bible School levels, in agriculture, Christian camping, Sunday school education, hospitals, senior housing, and various other endeavors. The family lived in various locations in the Winkler area until 1946 and then moved to Winnipeg.

Abram was an industrious person all his life. While still in elementary school, he began to work for Dyck and Kroeker, the general store owned by his brother and brother-in-law. After the death of his father he had to interrupt his education to work on the farm of his new stepfather, Peter Dyck. Then, in 1911 he was able to continue his education at Mennonite Collegiate Institute in Gretna, and the following year at Normal School in Manitou. In 1913 he began his teaching career at a school just north of Winkler, while at the same time continuing his own education with Fred Groves. In 1915, a year after his marriage to Elizabeth Nickel, he gave up his teaching to continue his business career, begun as a young lad.

The partnership, Kroeker Brothers Limited, lasted for 13 years until 1928. During this time he also continued his education. He attended the Bible Institute of Los Angeles (now Biola University), 1920-1922, in Los Angeles, California, returning to Winkler during the summers to work. This education prepared him for his involvement with the founding of Winkler Bible School in 1925. Also, during these years he served on the Winkler District School Board, following in the footsteps of his father and older brother, Jacob.

In 1928, when the business partnership was dissolved, he and his brother, Peter, took the farm assets and began a farming operation. He introduced row crops such as corn for grain, seed corn production and, in 1936, Western Canada 's first corn-drying kiln. In 1942 he introduced potatoes which have become an important crop in southern Manitoba and also on the Kroeker farms.

In 1929 Kroeker began teaching at the Winkler Bible School while continuing on the Board. He taught mostly in the area of Sunday school and children's ministries. In the 1930s this also involved holding summer camps for children, as a training assignment for his students. However, facilities were often inadequate. In 1939, therefore, after much searching, he headed a group which bought a lakefront property at Arnes, on Lake Winnipeg. The war interrupted their development plans for the property and camp. A new group took up the cause after the war, and in 1949 Camp Arnes began with Abram as chair of the board, and his son, Alfred, its first summer director. Abram remained chair until 1960. In 1935 he was also part of the founding group of the Bethel Hospital.

In 1946 Kroeker moved his family to Winnipeg. He reorganized the partnership with his sons on the farm in 1948. In 1955 it was incorporated as a family farm corporation, which eventually became Kroeker Farms Limited. He continued his involvement in church activities and education. He supported his family in their many endeavors. During all this time his wife, Elizabeth, supported him in his many activities. During his many absences in the 1920s and 1930s, she managed the farm, took the major responsibility of raising the family, enlivened the many family and community social activities, and was a perfect hostess to the many visitors.

Abram made a significant contribution to the church and to the agricultural industry in Manitoba and Canada. He served faithfully and was recognized as an important leader in his generation.