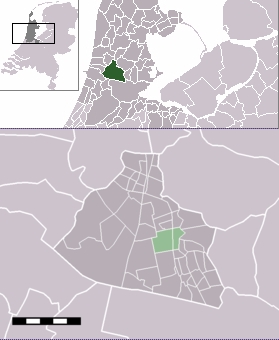 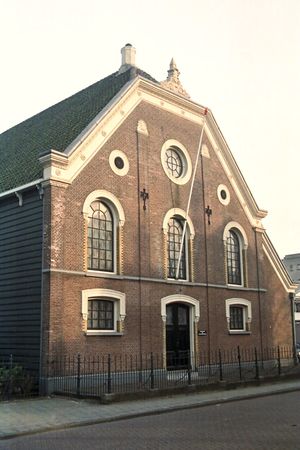 Koog aan de Zaan (Koog), a town about 10 miles (16 km) north of Amsterdam (coordinates: 52.46079, 4.80473 [52° 27′ 38″ N, 4° 48′ 17″ E]), in the Zaanstad municipality, with a Mennonite congregation, the official name of which is Koog-Zaandijk (Zaandijk being a town adjacent to Koog aan de Zaan). Because sources are lacking, it is impossible to state when the congregation of Koog-Zaandijk was founded, but at an early time Anabaptists were already found here. About 1600 the Mennonites comprised the great majority of the inhabitants, both of Zaandijk and Koog. In this time most of them belonged to the Waterlander branch, some were Flemish, and a few Frisian. None of these groups formed an independent congregation and only a primitive Flemish meetinghouse was found at Koog aan de Zaan. The Waterlanders belonged to the congregation of Westzaan and Oost-Zaandam, the Flemish to the Flemish congregation of West-Zaandam, and the Frisians to the congregation of Zaandam and Westzaan-Zuid. In the course of time most Frisians joined the Flemish group, and both Flemish and Waterlanders obtained meetinghouses at Koog and became independent congregations. A Flemish meetinghouse was rebuilt in 1645. Until 1648 the Flemish Mennonites of Zaandam also used to worship in the Koog meetinghouse, but in 1648 a Flemish meetinghouse was built at Zaandam, and the Koog-Zaandijk group, including that of Wormerveer, became somewhat independent.

The united congregation witnessed a period of prosperity. In 1701 the membership numbered 584, the highest number ever reached. An orphanage was built in 1697, and in 1698 Abraham Verduin, who had been trained by Galenus Abrahamsz of Amsterdam, was called to serve the congregation as preacher. He served until about 1752. The congregation was a member both of the Rijper Sociëteit (Waterlander Conference of North Holland) and of the Zonist Conference.

Among the families of Koog-Zaandijk who promoted Mennonitism was the Honig family; members of this family, who founded the large and well-known Honig grocery factories, are still found here as members of the Mennonite congregation.