Kohlhof is located between Speyer and Ludwigshafen in the Palatinate, Germany. It has existed since the middle of the 17th century, and belonged to the electoral family. It was originally called Kohlloch because it made charcoal from the wood of the forests. Mennonites leased it as hereditary lessees after 1713. 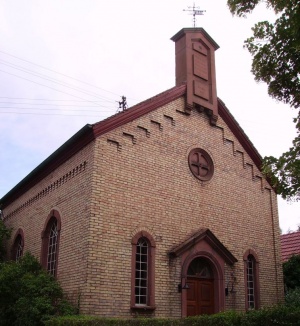 In that year Ulrich Schneider took it over, and on 12 February 1716 he gave one half of it over to Jakob Blickensdörfer and the other half to Joseph Burgholder, the son-in-law of Hans Gochnauer. The Mennonite register in the national archives at Karlsruhe lists five names in 1717: Ulrich Schneider, Hans and Jakob Gochnauer, Matth. Stauffer, and Hans Jakob Blickensdörfer. The register of 1768 names two families: Georg Wagner and a Blickensdörfer widow. Descendants of these families (as of the 1950s) were still living on the Kohlhof, though the Wagners were no longer Mennonites. In 1806 it became the property of the inhabitants.

As a congregation Kohlhof is first mentioned in 1790, when permission was asked at Neustadt to meet for worship and to build a church. Permission was granted in a government rescript of 5 November 1790, with the stipulation that the building should not look like a church and should not have a bell. But the building could not be erected until 100 years later, with gifts from other Mennonite churches and a grant of 500 marks from the local government.  It was dedicated 12 August 1888.

Before 1888 meetings had been held in a specially furnished room in the home of a member. The earliest information dates back to 1791; Georg Blickensdorfer, who was the preacher at both Kohlhof and Neuwied, wrote soon after permission for meeting had been granted, "On 20 February 1791 the first meeting was held on the Kohlhof with 70 souls."

Live connections existed at that time with the Moravian Brethren. Several Kohlhof Mennonite families moved to Neuwied and joined them there. That is probably the reason why the Moravian Brethren still meet annually for a conference at Kohlhof. These meetings were at first called Gehilfenkonferenz. The first one is recorded to have taken place on 13 June 1826. It was attended by 28 brethren. Other meetings were held on 19 June1833, 16 September 1835, and 24 May 1836 in Kohlhof, and in 1827 and 1828 in Hassloch.

In 1833 the Kohlhof church made an agreement with the Friedelsheim church that they would be served by the Friedelsheim minister, but would maintain their congregational independence. Kohlhof early had its own cemetery, and made a new one in 1840. It was incorporated in 1890. The membership in 1934 was 47, of whom 32 were living on the Kohlhof. In 1953 it was 65. Johannes Foth, pastor of the Friedelsheim Mennonite Church, started serving the congregation in 1904. The pastor in 2007 was Alejandro Zorzin.