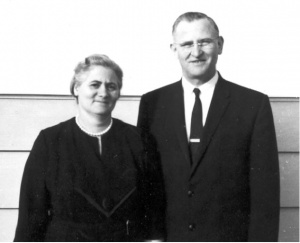 In 1925 John was baptized by Elder Peter Neufeld in the Mennonite Church at Chortitza. John immigrated to Cabri, Saskatchewan in 1926. During the six-and-a-half years John was a widower he attended Herbert Bible School and Winkler Bible School. In 1937 while in Cabri, John was ordained as a minister.  He was called to work as a Sunday school teacher, choir leader, youth worker and evangelist, and taught for a year at the Swift Current Bible Institute.

In March 1938 John was called to Yarrow, BC where he helped to organize the Yarrow United Mennonite Church. The Klassens ministered there for almost twenty years. During this time John also taught for a year at the Coghlin Bible School and a year in the Bethel Bible Institute. The Mission Board of the Mennonite Conference of BC called John to minister in the Peardonville Mennonite Church in Abbotsford, BC in 1958. They served there until 1963 at which time the Klassen family moved to Burnaby, BC. In Burnaby John and Annie ministered to a group of 20 to 30 believers for a period of one-and-a-half years. The Klassens served the Oliver Mennonite Church in 1968.  During these years the Klassens made many house visitations, held Bible studies, ministered at funerals, performed weddings and prepared many people for baptism. John also served as chairman of the board of Bethel Bible Institute in Abbotsford, BC for six years.

During these years the Klassens experienced many joys along with sorrows, but their service was a rich blessings to many. The verses (Isaiah 53:5 and Romans 8:14) given to John at his baptism gave him assurance of salvation.  John passed this hope on to the many to whom he ministered.