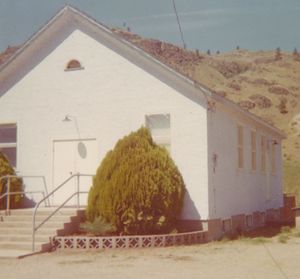 Oliver Mennonite Church (formerly Oliver United Mennonite Church), located near the town of Oliver, British Columbia, was a member of the Conference of Mennonites in British Columbia from 1940 until 1987. The congregation began in 1933 when five families from Manitoba, including Johann Harms, Jakob Harms, and Abraham Spenst, settled in Oliver, a fruit growing region in the southern Okanagan region. Some of these families had horticultural knowledge based on their experience with soft fruit orchards in southern Russia. For the first few years, the small group gathered for Sunday services in various homes and read sermons from “Briefe an mein Volk” (“Letters to my People”) written specifically by Ältester Jacob H. Janzen of Ontario for immigrant groups scattered across Canada. Ältester N. W. Bahnmann, itinerant minister, came occasionally to preach. He also served communion and performed baptisms. On the suggestion of Jacob H. Janzen, Jacob Thiessen, a minister residing in Armstrong, came to minister to the group in Oliver in 1937. In spring 1938 Jacob Thiessen moved to Oliver and started holding regular services. The congregation was organized on 19 June 1938 under the guidance of N. W. Bahnmann and the first meetinghouse was dedicated in November 1939; it was enlarged in 1942 to seat 100.

As in many of the struggling settlements, the Women’s Mission Group was formed early on. Items sold by the group raised funds for the building of the church. The congregation was among the founding congregations that formed the Conference of Mennonites in British Columbia in 1940.

In 1945 Wilhelm Raabe became the leading minister, followed by John Harms in 1946. In 1951, Gerhard A. Neufeld became the leading minister, and served until his retirement in 1966. Other leaders were Alvin Epp, Henry Dueck, John J. Klassen, Helmut Klassen, Henry Dyck and J. A. B. Adams. Peter Goertzen served in an interim capacity between ministers. The language of worship was English; the transition from German occurred in the 1960s.

The congregation struggled due to a number of young people moving away and conflicts caused by the charismatic movement in the 1970s. The congregation finally closed in 1987.

Churches in Profile. Clearbrook, BC: Conference of Mennonites in British Columbia, 1978: 81-84.

Pauls, Helen Rose. "The Way We Were: Oliver." Mennonite Historical Society of BC Newsletter (Spring 2003): 5.