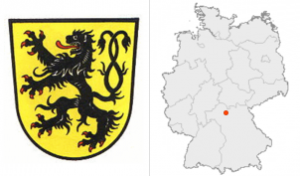 Coat of arms and map of Königsberg in Bayern Source: Wikipedia Commons

For Anabaptist history the city and its vicinity is important, for from it the Anabaptist movement soon spread over Middle Germany. The first Anabaptist preacher there was Hans Hut, a native of this region. Until 1524 he was a sexton at Bibra, seven miles (12 km) south of Meiningen, but was expelled when he refused to have his child baptized. He went to Königsberg in Franconia (Meyer, 241). In the spring of 1526 he joined the Anabaptists, and became very active in Königsberg and the vicinity. In his sermons he moved away from the social revolutionary ideas of Thomas Müntzer, under whose spell he had been for a time; he sought instead to prove that the peasants had been in the wrong in the revolt, in that they had sought their own advantage, and not the glory of God (Wappler, Thüringen, 31).

Hut's words fell on receptive soil. In a short time he had won a stately following. The sparsely populated region around Königsberg, which was then an enclave of the electorate of Saxony, offered good opportunities for undisturbed meetings. Besides Hut, also the cabinetmaker Eucharius Binder and Joachim Mertz served as evangelists here for a time; but they soon went into other regions. They devoted themselves completely to the service of the new doctrine, "moved up and down the Main and its tributaries, and everywhere challenged the people to attend their conventicles, which they usually held at night and behind barred doors in remote mills, farms, or suburban homes" (Wappler, Thüringen, 29).

This extensive work could not long remain concealed from the authorities, who scented new calamities everywhere since the bad experiences of the Peasants’ War. In the middle of January 1527 the bailiff of Königsberg, Kuntz Gotsmann, received word from the bailiff of Wurzburg concerning Anabaptist activities in the Königsberg district with the request that he suppress them, "that no revolt may arise therefrom." Gotsmann accordingly had had three men arrested, among them Hans Beutel (Beutelhans), a Königsberg citizen, who was preaching to the peasants without the knowledge of the government, "in the pretense, as if they were proclaiming God’s Word." If such meetings continued, he reported to Koburg, another revolution could be feared. With Hans Beutel another Königsberg citizen, Wolf Schreiner (also called Wolf Schominger) was named, arrested because of the new baptism, furthermore a smith of Friesenhausen, who was returned to Wurzburg because he had been seized in the bishopric.

The bishop's representative wished to be present at the cross-examination of the Königsberg prisoners, and after the questioning by the bailiff of Königsberg, with the use of the rack applied by the Koburg executioner, he would also ask the prisoners some questions. Although it had never before been the custom to admit a representative of the bishop to a trial of a Königsberg peasant with torture, the Koburg government acceded to his wish (Berbig, 305 f.). The bailiffs agreed that both would apply the rack. The prisoners were evidently tortured until they admitted that they were planning a rebellion.

At a new hearing without torture, in the presence of the assistant magistrate, Georg von Hassberg, the mayor, and several councilors of Königsberg, they recanted some of their previous statements, saying that they had made them "out of lack of understanding and for fear of the rack." Their statement about the approaching end of the world only meant that "when God comes to judge the world at the end of time and would judge all men, they, as specially chosen Christians, if they remained true to the end, would help Christ judge the survivors, when He comes in His divine majesty in the clouds" (Berbig, 299, 335).

The reports were placed before Elector John of Saxony, who decreed in an edict of 27 February 1527 that the accused, Beutelhans and Wolf Schreiner, had, to be sure, forfeited their lives by making pretended baptism a sign of rebellion; but if the prince-bishop of Würzburg, Konrad von Thüngen (governed 1519-1540), would not have the prisoners in his realm put to death, he would also show mercy to the poor mortals and grant them their lives. Otherwise, if the two prisoners persisted in their faith they should be killed with the sword. In addition he decreed: In the entire Franconian territory no one is permitted to preach and perform the sacraments except the pastors and preachers ordained for the purpose (Berbig, 297).

Suspects, if someone gives security for them, should do church penance, according to the following stipulations: "Every Sunday before the sermon they shall come to Königsberg, report to the bailiff, stand in a row before the church door, without shoes, with a sack hung about each one, all speaking prohibited. At the beginning of the sermon they shall be called before the pulpit and here again stand in a row with downcast eyes and bowed heads. After the sermon a public confession is to be made by the culprits. The people are to be instructed on the error by skillful preachers. The property of the principal offenders shall be described, evaluated, and confiscated, but the offenders shall have the use of the income for their sustenance. All who are subjected to the 'shame punishment,' shall be put into prison one or two days every month and then renew their promise. Obstinate persons are to remain under arrest and be further prosecuted" (Berbig, 297).

Other arrests had meanwhile been made, including women with small children and pregnant women, from the territories of Königsberg, Münnerstadt, Königshofen, Hassfurt, and Staffelstein. The prisons were overflowing (Berbig, 333). In Königsberg, Hans Forster, the son-in-law of Hans Beutel; Thomas and Kaspar Spiegel, brothers from Ostheim; and the miller of Aurach, whose mill was in the bishopric, were seized.

The council of Königsberg at once began the instruction of the prisoners, securing the Koburg preacher Balthasar During, a native of Königsberg. He preached there on 7 April 1527 (Berbig, 336), but was apparently not too successful (Wappler, 34).

The death sentence was pronounced on them in spite of a lack of evidence of an intended revolution (all the racked prisoners instead stressing their nonresistance), and in spite of the fact that the burgomaster and council of Konigsberg praised their previous conduct, rejected all suspicion of revolutionary plans, and asked that their lives be spared, and that the council of Koburg gave a similar testimonial for Wolf Schreiner. The bishop had Kaspar Spiegel and the miller of Aurach beheaded; thereupon the elector had Beutelhans and Wolf Schreiner put to death (Wappler, Kursachsen, 4, 129-31).

Many families fled before the persecution, but the movement could not be suppressed in Franconia or Saxony. In spite of the newness of the movement and the short time the adherents had belonged to it, their primitive Christian ideals were so deeply implanted that they would not yield it up to violence. As in Zürich, fugitives spread the movement to adjacent countries. Through Hans Hut and his group it spread south to Upper Austria; in the north and west it penetrated into Thuringia as far as the Harz and into Hesse. Even though some excitable spirits became guilty of selfish deeds, for which the leaders were not at all responsible, the religious goals of the original movement remained immovably the basis of the movement. Wappler, the historian of the Anabaptist movement in Thuringia, reaches the following conclusion on the basis of existing government records: "Their ideal is holiness. Therefore there is among them more or less withdrawal from the state and its institutions, a quiet acceptance of suffering as the cross of Christ, and a simple, purely biblical devotional worship conducted by preachers of their own choice" (Wappler, Thuringen, 221).