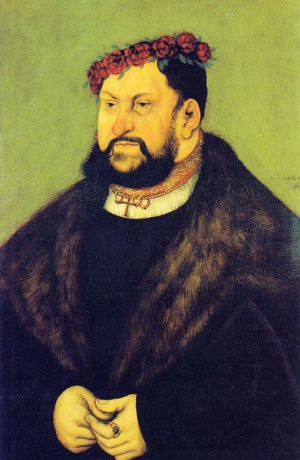 Johann was an ardent friend and patron of Martin Luther, headed the evangelical estates in Germany and was an active promoter of the Reformation. On 26 February 1525 he issued a public order for Koburg, "that no one, be he citizen, peasant, or whoever, except regular pastors, preachers, and chaplains who have charge of pastoral work at each place and are authorized to do so, shall be permitted to preach, baptize, or perform other offices of the kind at his home or anywhere else." This regulation was extended to Thuringia and Franconia on 31 March 1527.

On 17 January 1528 the Elector issued a new mandate against the Anabaptists (Wappler), extending the scope of the previous one. All who, without office, preach or baptize, should be arrested. Likewise all writings and books of the Anabaptists, sacramentists, and enthusiasts should be confiscated. This mandate was to be posted on the church doors and announced every Sunday at the close of the services.

As early as February 1527, the first Anabaptists in the electorate of Saxony were seized, racked, and beheaded. They were Beutelhans of Konigsberg, and Wolf Schreiner. Hence it was not surprising that Johann the Steadfast readily gave his assent to the decree of Emperor Charles V, 23 April 1529, condemning Anabaptists to death with fire and sword. This position he stubbornly maintained in opposition to Philipp of Hesse. On 4 December 1529, he wrote Philipp, demanding that he have Melchior Rinck executed, and if he could not agree to do it, he should at least have him banished, lest he lead other subjects astray. Thus he managed to have Rinck exiled from Hesse and Saxony. He also wrote a warning to Count Günther of Schwarzburg, on 27 March 1530, concerning the Anabaptists, requesting that he arrest Valentine Ickelsamer and deliver him to Gotha. On 18 January 1530 he had six Anabaptists executed at Rheinhardsbrunn, an act which caused considerable unrest.

On 9 October 1531, some Anabaptists seized in Hausbreitenbach were brought to Eisenach and tried on the rack. What should be done with them? Johann requested an opinion of the Wittenberg theologians, which was sent in late October. It recommended the death penalty. Since the Anabaptists were no doubt revolutionary, the elector might with a clear conscience apply the death penalty against them. But though Johann agreed, he lacked authority to do so, for Hausbreitenbach was held in joint jurisdiction with Hesse. Thus a long-continued quarrel arose between Johann of Saxony and Philipp of Hesse. The suggestion was made that all the Anabaptists under joint jurisdiction be equally divided between them, allowing each to proceed as he saw fit. But there were serious objections to this course.

The matter was then presented for discussion to the League of Schmalkalden in session at Nordhausen (early December 1531), but without result. Saxony insisted on the death penalty; Hesse resisted. Meanwhile Rinck had again been seized. Johann insisted on the supreme penalty; in a letter dated 21 December 1531 he expressed the hope that Philipp would now have the dangerous prisoner executed in accordance with the law of 23 April 1529. But the landgrave refused. Instead he sentenced him to "eternal imprisonment." He informed Johann of this fact and stated that he could not sentence anyone to death by the sword for a matter of faith. The elector, defeated in the case of Rinck, in a letter of 15 January 1532, begged the landgrave to come to an agreement with him in the punishment of the Hausbreitenbach Anabaptists; the laws should be strictly obeyed. But the landgrave was unwilling to accede, and the earlier suggestion of dividing the Anabaptists in the area was carried out. Of the Anabaptists falling to Saxony three were killed (1532).

Johann d. 16 August 1532 and was succeeded by his eldest son, Johann Friedrich I.