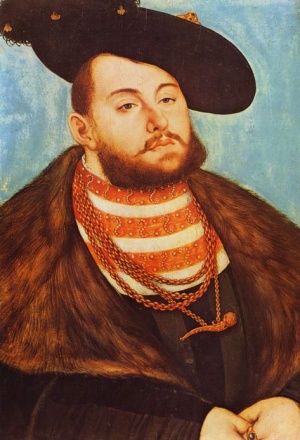 Johann Friedrich I der Großmütige (John Frederick the Magnanimous): Elector of Saxony (Kurfürst von Sachsen), 1532-1547, Duke of Saxony, 1547-1554; born 30 June 1503, the eldest son of Johann the Steadfast and Sofie of Mecklenburg-Schwerin. He succeeded his father as elector of Saxony upon his father's death in 1532 and ruled along with his younger half-brother, Johann Ernst I, Duke of Saxe-Coburg (1521-1553). In 1542 Johann Friedrich decided to rule alone, and handed over the Franconian family holdings such as Coburg and Eisfeld to Johann Ernst. Johann Friedrich was the leader of the Protestant confederation in the German territories (the Schmalkaldic League), and had a personal relationship with Martin Luther. He was one of the signers of the Augsburg Confession.

Johann Friedrich followed closely in the steps of his father. He demanded of Philipp of Hesse that he execute Fritz Erbe, the Anabaptist prisoner at Eisenach, and obtained the verdict of the Leipzig jurists, which also required Erbe's death. Nevertheless Philipp was reluctant to carry out this sentence (a letter dated 22 May 1533 to Johann Friedrich). In the reply of 25 May, Johann Friedrich insisted that Fritz Erbe be punished by death, supporting his opinion on the imperial mandates and on the opinion his father had received from the Wittenberg theologians. Still Philipp did not yield; on 28 May he replied that he could give his consent only to further imprisonment or expulsion. The dispute nearly ended in a rupture between the two princes, for Johann Friedrich intended to have Erbe executed on his own responsibility (letter of 28 July 1544); nevertheless consideration for Philipp saved Erbe from a martyr's death; he died in prison.

The 19 Anabaptists imprisoned at Berka (Hausbreitenbach district), who were cross-examined on 19-21 June 1533, were treated better. In this case also, Johann Friedrich wanted to apply the death penalty according to the imperial mandate; the chancellor Brück agreed. But Philipp refused, and out of respect for him the prisoners were released.

On 26 January 1536, Johann Friedrich had three Anabaptists sentenced to death and executed upon the advice of Melanchthon (report to the elector of 19 January 1536) and the opinion of the legal scholars at Jena (Wappler, Stettung). Two additional executions followed. On 10 April 1536, Johann Friedrich issued a new mandate against the Anabaptists, drawn up by Melanchthon. The first part repeated the mandate of 17 January 1528. Then as a warning to all, and pointing out the recent executions, follow the Anabaptist articles of faith, by which they were misleading and poisoning the soul and body of the simple populace. At the same time the elector sent to every parson in the electorate of Saxony a copy of Melanchthon's book, Verlegung etlicher unchristlicher Glaubensartikel, welche die Wiedertäufer fürgeben (Wittenberg, n.d.) to be read and explained on every third Sunday.

In 1543 Johann Friedrich had the steadfast Peter Erbe executed (Wappler, Inquisition). In 1545 he wished to apply the imperial mandate to some Anabaptists in Mühlhausen. In a joint letter with Duke Maurice of Saxony (24 July) he tried to gain Philipp's consent. But the latter made a decisive reply (19 August 1545), which is a beautiful memorial to his religious tolerance and magnanimity. At the end of January 1530 the court of Wittenberg had two Anabaptists put to death, causing an unfavorable reaction.

The Schmalkaldian War broke out in 1546 and Johann Friedrich's forces were defeated by the forces of Emperor Charles V at the battle of Mühlberg on 24 April 1547. Johann Friedrich was taken prisoner by Charles V and the electorship of Saxony was handed over to his cousin, Maurice, Duke of Saxony. During his time in prison, Johann Friedrich exhibited an unwavering faith and calm demeanor. He was released from prison in 1552.