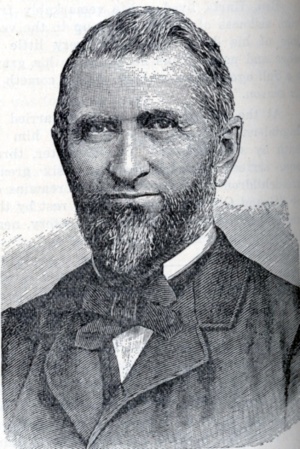 In 1851 the bishops Abraham Hunsicker and Israel Beidler and the preachers Henry A. Hunsicker and Abraham H, Grater separated from John H. Oberholtzer's Conference in Eastern Pennsylvania (later known as General Conference Mennonite Church). "But having a majority of the members and friends, both in Phoenixville and in Germantown to stand by us, we continued our services at both these places until 1875. After the Meeting Houses in Skippack and Providence were closed against us, we held services at school houses, and in some of the neighboring churches opened to us, until 1854 when we built a church at Freeland, now Collegeville, which was essentially a non-sectarian church, to be open for ministers in good standing in our own and other denominations, who chose to help the church of Christ. Our Church, as well as our school, were both flourishing. We added to the Ministry during these years, Francis Hunsicker, Jarret T. Preston, and Joseph H. Hendricks." (Quotation from Henry A. Hunsicker in the 1907 Mennonite Year Book and Almanac, p. 24.)

The church established by the Hunsicker group in 1854 was called the "Trinity Christian Society." In 1888 Hendricks and his church were received into the Reformed Church, which act displeased Henry A. Hunsicker.

The Hunsicker group were for a time known as Reformed Mennonites, at least they were called Reformed Mennonites at Germantown. But this name was already used by a radical sect of Mennonites in Lancaster County, the followers of John Herr, and the "Reformed" Mennonites of Germantown soon became General Conference Mennonites. Indeed the whole Hunsicker group disintegrated. The Collegeville Church became Reformed, the Lutherans acquired the Phoenixville property, and the Germantown Church united with the Eastern District of the General Conference Mennonites. Both Henry A. and Francis R. S. Hunsicker became Presbyterians.

Hunsicker, Abraham. A Statement of Facts, and Summary of Views on Morals and Religion, as Related with Suspension from the Mennonite Meeting 1851. Philadelphia, PA, 1851.